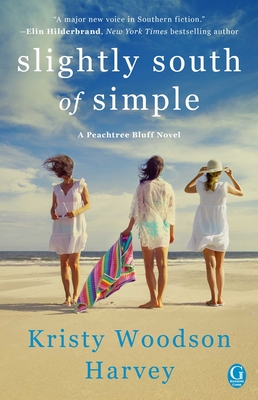 This is book number 1 in the The Peachtree Bluff Series series.

“One of the hottest new Southern writers.” —Parade

From the next “major voice in Southern fiction” (Elin Hilderbrand, New York Times bestselling author) comes the first in an all-new series chronicling the journeys of three sisters and their mother—and a secret from their past that has the potential to tear them apart and reshape their very definition of what it means to be a family.

Caroline Murphy swore she’d never set foot back in the small Southern town of Peachtree Bluff; she was a New York girl born and bred and the worst day of her life was when, in the wake of her father’s death, her mother selfishly forced her to move—during her senior year of high school, no less—back to that hick-infested rat trap where she'd spent her childhood summers. But now that her marriage to a New York high society heir has fallen apart in a very public, very embarrassing fashion, a pregnant Caroline decides to escape the gossipmongers with her nine-year-old daughter and head home to her mother, Ansley.

Ansley has always put her three daughters first, especially when she found out that her late husband, despite what he had always promised, left her with next to nothing. Now the proud owner of a charming waterfront design business and finally standing on her own two feet, Ansley welcomes Caroline and her brood back with open arms. But when her second daughter Sloane, whose military husband is overseas, and youngest daughter and successful actress Emerson join the fray, Ansley begins to feel like the piece of herself she had finally found might be slipping from her grasp. Even more discomfiting, when someone from her past reappears in Ansley's life, the secret she’s harbored from her daughters their entire lives might finally be forced into the open.

Exploring the powerful bonds between sisters and mothers and daughters, this engaging novel is filled with Southern charm, emotional drama, and plenty of heart.

"Kristy Woodson Harvey cuts to the heart of what it means to be a born-and-bred Southerner, complete with the unique responsibilities, secrets and privileges that conveys. Discover four women who are at once different yet utterly the same, and a town that you won’t ever want to leave. Interior design, family secrets, life on the coast… it’s easy to see why everyone is buzzing about SLIGHTLY SOUTH OF SIMPLE."
— Cassandra King

"With a charming, coastal Southern setting, Slightly South of Simple is a heartfelt story about the universal themes of love, loss, forgiveness and family. I'm thrilled to hear that this book is part of series and look forward to getting to know this cast of strong Southern women even better."
— - Erin Z. Bass

"Kristy Woodson Harvey really knows how to tell a southern tale.  Every single time her stories unwind gently, like a soft wind in Georgia, then that wind catches you off guard and throws you into her characters’ tumultuous lives. Slightly South of Simple is the same. One gracious, old home inherited from Grandma, one mother who has so many secrets if the walls talked they would pour out like lemonade on a hot summer day, and three headstrong sisters, all working their way through the chaotic mess and joy of life, together. I loved it."
— --New York Times bestselling author Cathy Lamb

"Heartfelt and warm, SLIGHTLY SOUTH OF SIMPLE deftly explores the familial ties that bind us— and those that have the power to break us. Kristy Woodson Harvey's cast of characters— and the charming beach town of Peachtree Bluff— will crawl into your soul and stay there."
— --Colleen Oakley, author of Close Enough to Touch

"If you haven’t already guessed it, we love our Southern fiction just as much as we love our sweet tea. The small coastal towns, the family chaos, the sexy tousled-haired neighbor that can fix anything that's broken...and we mean anything.

Harvey, considered to be the “it girl” of Southern fiction, introduces the first novel in the Peachtree Bluff Series this spring. Child, this book is everything! We’re hoping to see this soapy read on the Hallmark Channel.”
— —Jamey Giddens

“Harvey’s devotion to realistic character development pays off by the end of the novel, which provides clear resolutions to some plots and leaves other hanging in a way that practically begs for a sequel…because Harvey is meticulous about closing out each character’s arc in a satisfying way….SLIGHTLY SOUTH OF SIMPLE is so warm, inviting and real...”
— --Bookpage

“Fans of Nancy Thayer and Patti Callahan Henry will devour this story of the first of three sisters, the men in their lives, and the mother who bonds them all.”
— —Booklist Online

“My prediction is that writers come and writers go, but Kristy Woodson Harvey is here to stay. The warmth, wit, and wisdom of this novel pave her way into the exclusive sisterhood of southern writers.”
— —The Huffington Post

“If you’re looking for a new series to get lost into, this story of three sisters and their mother will have you flying through the pages.”
— Glitter Guide

“Harvey pulls the reader into the hearts and souls of her characters.”
— Heather Gudenkauf, New York Times bestselling author of The Weight of Silence

"Kristy Harvey is a natural."
— Ann Garvin, Author of On Maggie’s Watch and The Dog Year