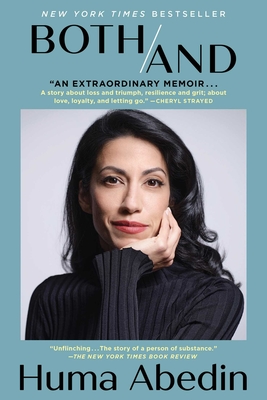 A New York Times bestseller, this extraordinary memoir from Huma Abedin—Hillary Clinton’s famously private top aide and longtime advisor—offers “a gripping testament to the power of a woman finding her voice, owning her ambition, and sharing her truth” (Glennon Doyle).

Abedin’s stunning memoir garnered an extraordinary amount of media coverage, with appearances on CBS Sunday Morning, the Today show, The Late Show with Stephen Colbert, The View, Late Night with Seth Meyers, Christiane Amanpour, and coverage in many other outlets, including The Washington Post, The New York Times, and NPR.

Abedin launched full steam into a college internship in the office of the First Lady in 1996, never imagining that her work at the White House would blossom into a career in public service, nor that her career would become an all-consuming way of life. She thrived in rooms with diplomats and sovereigns, entrepreneurs and artists, philanthropists and activists, and witnessed many crucial moments in 21st-century American history—Camp David for urgent efforts at Middle East peace in the waning months of the Clinton administration, Ground Zero in the days after the September 11 attacks, the inauguration of the first African American president of the United States, and the convention floor when America nominated its first female presidential candidate.

Abedin’s relationship with Hillary Clinton has seen both women through extraordinary personal and professional highs, as well as unimaginable lows. Here, for the first time, is a deeply personal account of Clinton as mentor, confidante, and role model. Abedin cuts through caricature, rumor, and misinformation to reveal a crystal-clear portrait of Clinton as a brilliant and caring leader, a steadfast friend, generous, funny, hardworking, and dedicated.

Both/And is “the story of a person of substance—someone determined to tell her own story” (The New York Times) including the heartbreaking chronicle of her marriage to Anthony Weiner, what drew her to him, how much she wanted to believe in him, the devastation wrought by his betrayals—and their shared love for their son.

Abedin’s journey through the opportunities and obstacles, the trials and triumphs, of a full and complex life is a testament to her profound belief that in an increasingly either/or world, she can be both/and. Abedin’s compassion and courage, her resilience and grace, her work ethic and mission are an inspiration to women of all ages.

Huma Abedin has spent her entire career in public service and national politics, beginning as an intern in First Lady Hillary Clinton’s office in 1996. After four years in the White House, she worked in the US Senate as Senior Advisor to Senator Clinton and was traveling Chief of Staff for Clinton’s 2008 presidential campaign. In 2009, she was appointed Deputy Chief of Staff at the US Department of State. Huma served as Vice Chair of Hillary for America in 2016, resulting in the first woman elected nominee of a major political party. She currently serves as Hillary Clinton’s Chief of Staff. Born in the United States and raised in Saudi Arabia, Huma moved back to the US in 1993. She lives in New York City with her son, Jordan. Both/And is her first book.

“Outstanding... This is a brave, bold story.”
—Book Reporter

“It is one of the most powerful interviews I have ever done… and one of the best books I’ve ever read… utterly fascinating.”
—Norah O’Donnell, CBS News

"Both/And is also a story of Abedin’s life before and outside politics. She tells of being born in Kalamazoo, Michigan, of spending most of her youth in Saudi Arabia, a father and mother who held doctorates, of family ties in the Middle East, the subcontinent and the US. It is the strongest part of the book, a tale of an immigrant, of an upward arc."
—The Guardian

"Abedin will have a next act. She is an extremely driven woman, even as she is still haunted by her husband's transgressions and the exceedingly public way they were revealed. Despite it all, this is a woman who wants to be part of America’s future, even if it means putting herself out there in a painful way. And that is to be applauded."
—MSNBC Morning Joe

"Abedin is presenting her own narrative with her new memoir, Both/And: A Life in Many Worlds. The much-anticipated book chronicles her fascinating life ... Both/And is available now; below, find some of the most powerful—and heartbreaking—moments from its pages."
—Elle

"Abedin was a witness to and participant in all this tumult but never the narrator of it ... The memoir is a chance — after a lifetime as the trusted and silent helpmate — to assert herself."
—The Cut

"To a fascinated outside world, Huma Abedin was always the elegant woman standing at the back of the room, not speaking ... Until now. [Abedin] dissects and illustrates the three relationships that have framed her life ... There are other humorous moments in the book ... The shame Abedin experienced through Weiner's behavior is the most absorbing part of the book, and the hardest to read."
—Associated Press

"Here [Abedin] finally takes the chance to tell her own story in her own words, tracing her life through the lens of straddling cultures, identities, faiths, and more."
—Entertainment Weekly

"Huma Abedin shares her story for the first time in this memoir, detailing moments from growing up in Saudi Arabia and then the U.S. and from a college internship in the East Wing in 1996, as well as offering a candid examination of her marriage to Anthony Weiner."
—Fortune

"With her memoir, Both/And: A Life in Many Worlds, Abedin lays out her story — the good and the bad."
—NPR.org

“[Both/And] is the story of a person of substance — someone determined to tell her own story . . . unflinching.”
—New York Times Book Review

"Huma Abedin’s memoir took my breath away.  This is a luminous, thoughtful, warm, and often humorous journey through the life of a woman who both witnessed recent history and helped make it.  It’s also a love letter to parents who showed her that, despite what society might say, she needn’t choose one culture or another.  It’s not either/or.

Both/And is incisive, inclusive, engaging, beautifully written.  You will love every moment you spend in the company of this extraordinary woman, who is Hillary Clinton’s right hand and so much more."
—Louise Penny, author of The Madness of Crowds and State of Terror

"I tore through Both/And, a compelling and unforgettable memoir that is a testament to the power of telling one's own story. Both/And is a moving portrait of a woman who—no matter how overwhelming the challenge or uniquely high the stakes—rises to each occasion with compassion, wisdom, and astounding bravery. It was as much an exciting and intimate look into the behind-the-scenes of American politics as it was a profound spiritual instruction: Huma's memoir shows us how to face the fire of one's life with dignity and grace. How to emerge, not burned, but radiant. Her writing shines and inspires."
—Fatima Farheen Mirza, author of the New York Times Bestseller A Place for Us

"An extraordinary memoir of an exceptional life, beautifully written, and told with candor, warmth and humility. It is also a timely reminder in these seemingly ever more divided times, of our common humanity, as Abedin explores her identity as a Muslim woman close to the center of U.S. politics and power. Utterly absorbing."
—Monica Ali, author of the New York Times Bestseller Brick Lane

“Huma Abedin’s Both/And is an extraordinary memoir about the most private and public things. With candor, insight, and courage, Abedin takes us boldly behind the scenes of many of the most important political events of the past quarter century and dazzlingly deep into the heart of the most poignant, powerful, and painful moments of her life—as a daughter, mother, wife, and top aide to Hillary Clinton. It’s a story about loss and triumph, resilience and grit; about love, loyalty, and letting go. The writing is just gorgeous. I was gobsmacked.”
—Cheryl Strayed, author of the #1 New York Times Bestseller Wild: From Lost to Found on the Pacific Crest Trail

"Both/And is an inspiring roadmap revealing how a little Brown girl from Kalamazoo, Michigan grew up to become a powerful political force navigating unimaginable rooms, relationships, and circumstances with incredible resiliency, stunning work ethic, and unwavering faith. There is no doubt that Huma’s personal and professional journey, told in her own words, is one of the most unique stories you will ever read."
—Cleo Wade, New York Times Bestselling Author of What the Road Said

"Both/And is a gripping testament to the power of a woman finding her voice, owning her ambition, and sharing her truth. Huma's humanity, tenacity, and singularity draw us deeply into her personal and professional journeys – and we are left inspired by her will to fight for herself and the world."
—Glennon Doyle, author of the #1 New York Times Bestseller Untamed, Founder of Together Rising

“I've long known Huma to be a compassionate and committed advisor and public servant. I've relied on her talents, wisdom, and counsel for a quarter-century. Both/And is the beautifully written account of a grand journey, and I’m so delighted she’s chosen to share her story of grit and grace with the world."
—Hillary Rodham Clinton