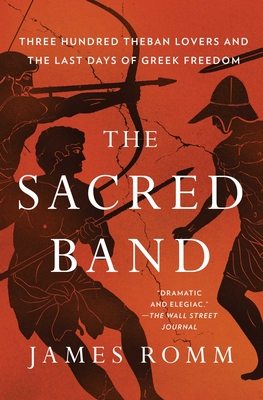 From classicist James Romm comes a “striking…fascinating” (Booklist) deep dive into the last decades of ancient Greek freedom leading up to Alexander the Great’s destruction of Thebes—and the saga of the greatest military corps of the time, the Theban Sacred Band, a unit composed of 150 pairs of male lovers.

The story of the Sacred Band, an elite 300-man corps recruited from pairs of lovers, highlights a chaotic era of ancient Greek history, four decades marked by battles, ideological disputes, and the rise of vicious strongmen. At stake was freedom, democracy, and the fate of Thebes, at this time the leading power of the Greek world.

The tale begins in 379 BC, with a group of Theban patriots sneaking into occupied Thebes. Disguised in women’s clothing, they cut down the agents of Sparta, the state that had cowed much of Greece with its military might. To counter the Spartans, this group of patriots would form the Sacred Band, a corps whose history plays out against a backdrop of Theban democracy, of desperate power struggles between leading city-states, and the new prominence of eros, sexual love, in Greek public life.

After four decades without a defeat, the Sacred Band was annihilated by the forces of Philip II of Macedon and his son Alexander in the Battle of Chaeronea—extinguishing Greek liberty for two thousand years. Buried on the battlefield where they fell, they were rediscovered in 1880—some skeletons still in pairs, with arms linked together.

From violent combat in city streets to massive clashes on open ground, from ruthless tyrants to bold women who held their era in thrall, The Sacred Band recounts “in fluent, accessible prose” (The Wall Street Journal) the twists and turns of a crucial historical moment: the end of the treasured freedom of ancient Greece.

James Romm is an author, reviewer, and the James H. Ottaway Jr. Professor of Classics at Bard College in Annandale, New York. His reviews and essays appear regularly in The Wall Street Journal and The New York Review of Books. He currently oversees the ambitious Ancient Lives series recently launched by Yale University Press.

"Romm, a Bard College professor, has an unusual knack for writing about ancient history for general readers ... I was most stirred by a parallel narrative examining how the story of the Sacred Band both inspired the beginnings of the struggle for gay acceptance in the 19th century and was also long a source of discomfort for many professional classicists."
—The New York Times, New & Noteworthy

"[Romm] deftly pieces the story together ... Mr. Romm negotiates artfully in fluent, accessible prose. But he really comes into his own when describing the Sacred Band’s dramatic and elegiac end."
—Wall Street Journal

"Romm’s book not only details the history of the Sacred Band, but illuminates this murky and murderously internecine period of Greek history ... Romm has an eye for interesting characters—such as the sociopathic tyrant Jason of Pherae, who made his spear into a god."
—The American Scholar

"The Sacred Band of Thebes was founded to protect the Boeotian League, the federation of cities that Thebes led. The band was the first professional standing army funded by the state in Greek history ... it was founded on the principle that men so intimately devoted to one another would fight as a cohesive unit ... This fascinating period of Greek history is the subject of classicist James Romm’s new book The Sacred Band."
—Humanities: The Magazine of the National Endowment for the Humanities

"A vivid portrait of ancient Thebes ... A spirited, informative classical history from an expert on the subject."
—Kirkus

"In this excellent work, Romm ... convincingly argues that Thebes was as important as Athens and Sparta during the last century of its history ... Excellent vignettes of contemporary non-Thebans (particularly Xenophon, an Athenian student of Socrates who was an unabashed partisan for Sparta) enhance the narrative ... [The Sacred Band] is highly recommended and will appeal to fans of Thebes, by Paul Cartledge, as well as readers of LGBTQ+ history."
—Library Journal

"Romm lucidly describes the era’s complex power struggles and explains how the pro-Sparta bias of Xenophon, who wrote the only surviving contemporaneous account of “the era of Theban greatness,” has colored modern perceptions of Thebes. This is an eye-opening and immersive portrait of a little-known aspect of ancient history."
—Publishers Weekly

"Lively and captivating ... this first full-length popular account dedicated to the “Sacred Band” performs a vital and overdue service: for classical history buffs, for readers interested in gay history and culture, and for anyone who appreciates a fascinating story, grippingly told."
—Daniel Mendelsohn, author of An Odyssey: A Father, a Son, and an Epic

"Bound by love, virtue, and valor, the Sacred Band of Thebes fought for Greek freedom and democracy, for more than a generation in a turbulent era ended by Macedonian conquest in 338 BC. James Romm has delved deep into the history and even the archaeology of this famous, little-understood corps of 300 lover-companions. The result is an exhilarating story of eros and power."
—Adrienne Mayor, author of Gods and Robots and The Amazons

"There are several famous 300s in human history but few deserve to be commemorated as does the Sacred Band of the ancient Greek city of Thebes — as James Romm, already very well known as a reviewer, translator, commentator and Herodotus expert, so amply demonstrates in this splendid, pioneering, indeed loving book."
—Paul Cartledge, author of Thebes: The Forgotten City of Ancient Greece

"Using contemporary language and interpreting through an enlightened sensibility, James Romm brings energy and relevance to an epic chapter of ancient history."
—Mary Norris, author of Greek to Me: Adventures of the Comma Queen

"James Romm has written a wonderfully readable book about one of the most fascinating and least known stories from the ancient world. Beginning with the Theban rebellion throwing off Spartan control to the destruction of the city by Alexander the Great, the tale of the rise and fall of Theban freedom resonates even today."
—Philip Freeman, author of Alexander the Great

"An immersive and deeply atmospheric story of strength and power – a power founded, above anything else, on love and belief. I can think of 300 reasons to recommend this book."
—Daisy Dunn, author of The Shadow of Vesuvius: A Life of Pliny