Andrzej Sapkowski's The Witcher: A Grain of Truth (Hardcover) 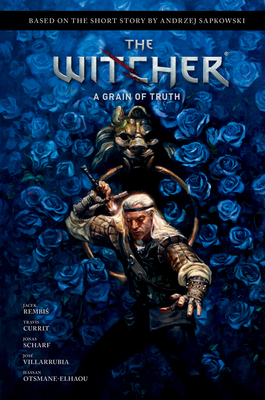 Geralt’s encounter with a beast reveals the truth behind fairy tales in this graphic novel adaptation of Andrzej Sapkowski's original short story.

Geralt takes a short cut down a beaten path, where he makes a grim discovery of two corpses. Backtracking their trail, he’s led to a derelict mansion secured with elevated walls and a gate—mysterious and ramshackle, yet adorned with a rare elegance Geralt could not ignore. He is met with the mansion’s owner—not quite human, but a beast with the faculties of a man. With Geralt unfazed by his monstrous appearance and displays of aggression, the beast invites him inside. A kind but wary host, he shares stories of his family, his life . . . and his curse. If the weight of his misdeeds could condemn him to the body of a beast—a retribution spoken of only in fairy tales, could there be another grain of truth in these tales of fantasy—one that could help him elude his fate and lead him to salvation?

This graphic novel is the first in a series of adaptations from Sapkowski's acclaimed short story collection The Last Wish! Script adaptation by Jacek Rembiś (Frostpunk) with art by Jonas Scharf (Bone Parish, War for the Planet of the Apes).

Andrzej Sapkowski is a Polish fantasy writer and former economist. He is best known for his best-selling book series The Witcher. In 2012 Sapkowski was awarded the Medal for Merit to Culture - Gloria Artis.