Under a White Sky: The Nature of the Future (CD-Audio) 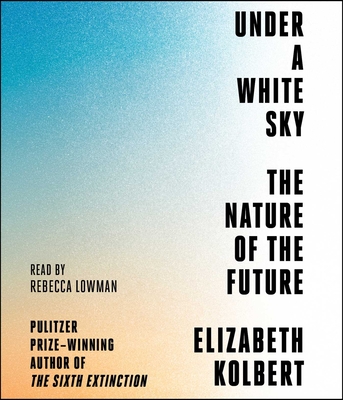 By Elizabeth Kolbert, Rebecca Lowman (Read by)
$29.99
Call for price

The New York Times bestselling author of The Sixth Extinction and Field Notes from a Catastrophe returns to humanity’s transformative impact on the environment in Under a White Sky.

That man should have dominion “over all the earth, and over every creeping thing that creepeth upon the earth” is a prophecy that has hardened into fact. So pervasive are human impacts on the planet that it’s said we live in a new geological epoch: the Anthropocene. The question we now face is: Can we change nature, this time in order to save it?

Elizabeth Kolbert, the Pulitzer Prize–winning author of The Sixth Extinction, takes a hard look at the new world we are creating. Along the way, she meets scientists who are trying to preserve the world’s rarest fish, which lives in a single, tiny pool in the middle of the Mojave; engineers who are turning carbon emissions to stone in Iceland; Australian researchers who are trying to develop a “super coral” that can survive on a hotter globe; and physicists who are contemplating shooting tiny diamonds into the stratosphere to cool the earth.

One way to look at human civilization, says Kolbert, is as a ten-thousand-year exercise in defying nature. In The Sixth Extinction, she explored the ways in which our capacity for destruction has reshaped the natural world. Now she examines how the very sorts of interventions that have imperiled our planet are increasingly seen as the only hope for its salvation. By turns inspiring, terrifying, and darkly comic, Under a White Sky is an utterly original examination of the challenges we face.

Elizabeth Kolbert is the author of Field Notes from a Catastrophe: Man, Nature, and Climate Change and The Sixth Extinction, for which she won the Pulitzer Prize. She has also been awarded two National Magazine Awards for her writing at The New Yorker, where she has been a staff writer since 1999, and the Blake-Dodd Prize from the American Academy of Arts and Letters. She lives in Williamstown, Massachusetts, with her husband and children

"Narrator Rebecca Lowman is an excellent choice for Kolbert's report on the future of our environment. Lowman narrates clearly, enunciates precisely, and provides a sense of immediacy while bringing energy and intelligence to the task. The work looks at the sinking of New Orleans, carbon capture in Iceland, invasive carp on the Mississippi River, geo-engineering, and more. Kolbert, a Pulitzer prize winner, is both an engaged writer and a thoughtful witness to the daunting challenges ahead. She is also a fine storyteller. The existential challenges of the heating of the planet and the often quirky fixes that are being proposed—from using nano-diamond aerosols in the sky to planting billions of trees—are scrutinized and weighed. Science writing has never been more important, and Kolbert's audiobook deserves a wide audience."
— Winner of an AudioFile Earphones Award, AudioFile Magazine