Fix What You Can: Schizophrenia and a Lawmaker's Fight for Her Son (Paperback) 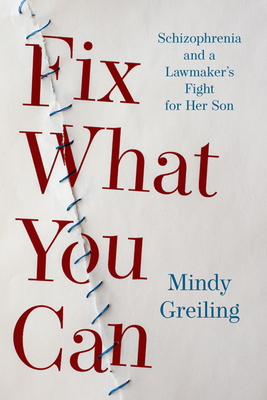 By Mindy Greiling
$19.95
Temporarily Out Of Stock. Usually Ships in 1-5 Days

In his early twenties, Mindy Greiling’s son, Jim, was diagnosed with schizoaffective disorder after experiencing delusions that demanded he kill his mother. At the time, and for more than a decade after, Greiling was a Minnesota state legislator who struggled, along with her husband, to navigate and improve the state’s inadequate mental health system. Fix What You Can is an illuminating and frank account of caring for a person with a mental illness, told by a parent and advocate.

Greiling describes challenges shared by many families, ranging from the practical (medication compliance, housing, employment) to the heartbreaking—suicide attempts, victimization, and illicit drug use. Greiling confronts the reality that some people with serious mental illness may be dangerous and reminds us that medication works—if taken.

The book chronicles her efforts to pass legislation to address problems in the mental health system, including obstacles to parental access to information and insufficient funding for care and research. It also recounts Greiling’s painful memories of her grandmother, who was confined in an institution for twenty-three years—recollections that strengthen her determination that Jim’s treatment be more humane. Written with her son’s cooperation, Fix What You Can offers hard-won perspective, practical advice, and useful resources through a brave and personal story that takes the long view of what success means when coping with mental illness.

Mindy Greiling was a member of the Minnesota House of Representatives for twenty years. She helped found the nation’s first state mental health caucus, which successfully lobbied for a significant increase in Minnesota’s mental health funding. She has served on state and national boards of the National Alliance on Mental Illness and is on the University of Minnesota Psychiatry Community Advisory Council.

"Mindy Greiling’s passionate support for mental health has turned Minnesota into a national leader on the issue."—St. Paul Pioneer Press

"An honest, gut-wrenching, heartbreaking story of the impact of a serious mental illness on an individual and their family. The book grapples with the tough subject of how to support and protect your son when he is symptomatic and vulnerable and yet live your life and promote independence and consequences for your son. Her story also underlines the importance of connecting with those who are traveling a similar journey, such as through NAMI, and the important role legislators have in building and improving our mental health."—Sue Abderholden, executive director, NAMI Minnesota

"A searing, honest, chilling, and heartbreaking narrative. As an indictment of our ‘broken’ mental health system, it works. Sadly, the system isn’t broken because it was never built. After we closed the mental hospitals, we never built a system to replace them."—Megan R. Gunnar, University of Minnesota

"Mindy Greiling’s riveting account pays tribute both to a mother’s inexhaustible love for a son diagnosed with schizophrenia and to the barriers families face as they struggle to help a loved one ravaged by the worst of mental disorders. Although deeply personal, Fix What You Can tells a much broader story as it exposes the difficulties families experience right now all across America. I have read hundreds of books written by parents about mental illnesses, and this one ranks among the best. This book is a well-written godsend for parents and those they love."—Pete Earley, author of Pulitzer Prize finalist Crazy: A Father’s Search through America’s Mental Health Madness

"Mindy Greiling has written a very useful book about her son’s schizophrenia and substance abuse. Her descriptions of the raw reality of this all-too-common combination are among the best. She demonstrates how complicated it is for families to get adequate psychiatric care for their loved ones, and she uses her political position as a prominent state legislator to change Minnesota’s laws regarding the treatment of serious mental illness. I strongly recommend this book."—E. Fuller Torrey, M.D., author of Surviving Schizophrenia