Sidelined: Sports, Culture, and Being a Woman in America (Paperback) 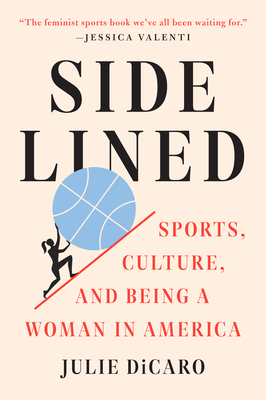 “Sidelined is the feminist sports book we've all been waiting for.”
—Jessica Valenti

Shrill meets Brotopia in this personal and researched look at women's rights and issues through the lens of sports, from an award-winning sports journalist and women's advocate

In a society that is digging deep into the misogyny underlying our traditions and media, the world of sports is especially fertile ground. From casual sexism, like condescending coverage of women’s pro sports, to more serious issues, like athletes who abuse their partners and face only minimal consequences, this area of our culture is home to a vast swath of gender issues that apply to all of us—whether or not our work and leisure time revolve around what happens on the field.

No one is better equipped to examine sports through this feminist lens than sports journalist Julie DiCaro. Throughout her experiences covering professional sports for more than a decade, DiCaro has been outspoken about the exploitation of the female body, the covert and overt sexism women face in the workplace, and the male-driven toxicity in sports fandom. Now, through candid interviews, personal anecdotes, and deep research, she's tackling these thorny issues and exploring what America can do to give women a fair and competitive playing field in sports and beyond.

Covering everything from the abusive online environment at Barstool Sports to the sexist treatment of Serena Williams and professional women's teams fighting for equal pay and treatment, and looking back at pioneering women who first took on the patriarchy in sports media, Sidelined will illuminate the ways sports present a microcosm of life as a woman in America—and the power in fighting back.

Julie DiCaro is a sports journalist and editor at Deadspin and a former attorney. Her writing has appeared in outlets including The New York Times, The Washington Post, Vice Sports, The Establishment, and HuffPost. An outspoken critic of sexism in the media and online harassment, DiCaro joined with ESPN’s Sarah Spain in 2016 to create the viral video #MoreThanMean, for which she won a Peabody Award, a 2017 Gracie Award for Women in Media, a Clio Sports Grand, and many other awards. She also received a 2019 Gracie Award for her work in Chicago sports talk radio. She lives in the Chicago suburbs.

“Sidelined is the feminist sports book we've all been waiting for. Whether you're a sports enthusiast or not, Julie DiCaro's work will captivate you.”
—Jessica Valenti, author Sex Object: A Memoir

“Sidelined is a remarkable window into what American sports culture—a powerful and enduring distillation of masculine power and privilege—tells us about the state of inequality in America. A must-read.”
—Soraya Chemaly, author of Rage Becomes Her

“Shame on the public and the press for treating sexism and misogyny in women's sports as a game. This book digs deep into why and how it happens and how it can be stopped.”
—Soledad O’Brien

"A writer, a lawyer, a columnist, a friend, Julie DiCaro has fearlessly taken on homophobia, racism and sexism in Sidelined, connecting with anyone who's been carelessly hurt or needlessly slandered.  She's the teammate who makes everyone better."
— Lesley Visser, Hall of Fame Sportscaster

“If there is any justice, Sidelined will become a cornerstone text for everyone who works in—or cares about—sports media. The level of insight that Julie DiCaro provides holds the key for making us more open-minded and empathetic about the sexism that pervades the industry. It is also written with a snappy flair that reads like the best sports writing.”
—Dave Zirin, sports editor at The Nation and host of the Edge of Sports podcast

“There’s no other current book that captures the challenges women face in sports media, and DiCaro does this masterfully. Bringing a feminist lens to the world of sports, this book sets itself apart with its reporting and relevancy.”
—Library Journal (starred review)

“Journalist DiCaro debuts with a sweeping takedown of misogyny in America’s sports media and professional leagues. . . . [Her] investigative journalism chops shine through in her insightful interviews, and she crafts engrossing narratives out of historical events like the battle to get female reporters access to locker rooms after games. Ultimately, DiCaro believes that if media outlets, teams, and fans want to address the deeply entrenched culture of inequality in the way women are treated in sports, they need to ‘grow the f*** up.’ This bracing call to arms is a step in that direction.”
—Publishers Weekly (starred review)

“A gifted writer, [DiCaro] moves deftly between her own experiences and the voices of other women. . . . Sidelined delivers a powerful call to action for women and men within the industry, as well as sports fans, who can also play a role in cultivating diversity and ending misogyny.”
—Booklist

“Through anecdotes, interviews, and focused research, [DiCaro] shows the myriad ways these problems are structural and institutional, while highlighting female athletes and reporters who continue to break barriers by refusing to be sidelined.”
—Shelf Awareness