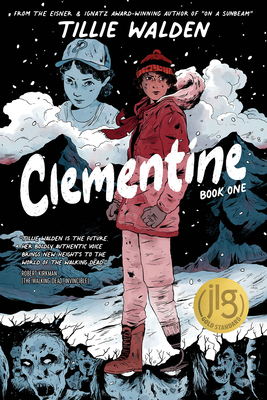 A 2022 Junior Library Guild Selection Tillie Walden is the future. Her boldly authentic voice brings new heights to the world of The Walking Dead. I couldn't be more proud of what she's doing with this series. --Robert Kirkman (The Walking Dead, Invincible) CLEMENTINE is an arresting exploration of trauma, community, and hope, devastatingly rendered in Tillie Walden's signature style. A triumph of the zombie genre.--Shannon Watters (Lumberjanes) With CLEMENTINE, beloved cartoonist Tillie Walden blows open the WALKING DEAD universe with a story full of blossoming relationships in the shadow of wintery death. It's ominous and magical and will have you craving more when the final page turns. --Chip Zdarsky (Daredevil, Stillwater) CLEMENTINE brings its own distinct voice, style, and sensibility to the Walking Dead universe, which is quite a feat on its own. On top of that, it's an exquisitely drawn story about how to survive trauma and find strength in ourselves and others. --Kelly Sue DeConnick (Pretty Deadly, Captain Marvel) Walden's knack for character development and unique perspective result in a tale perfect for diehard fans of The Walking Dead, as well as newcomers.-Library Journal (starred review) FROM THE WORLD OF ROBERT KIRKMAN'S THE WALKING DEAD...
...CLEMENTINE LIVES Clementine is back on the road, looking to put her traumatic past behind her and forge a new path all her own. But when she comes across an Amish teenager named Amos with his head in the clouds, the unlikely pair journeys North to an abandoned ski resort in Vermont, where they meet up with a small group of teenagers attempting to build a new, walker-free settlement. As friendship, rivalry, and romance begin to blossom amongst the group, the harsh winter soon reveals that the biggest threat to their survival...might be each other.