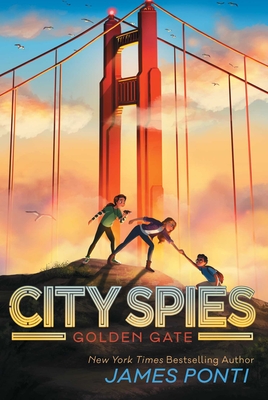 This is book number 2 in the City Spies series.

“The youngest spies at MI6 are embarking on another mission. After thwarting a kidnapping attempt on the high seas, Sydney and Brooklyn are at odds. But they’ll need to figure it out if they’re going to join the other spies on a mission to uncover a mole and maybe find Mother’s children. I loved this second entry in the City Spies series! Once again, Ponti has taken a fantastic idea that could end up rather goofy and made it feel possible...and fun and exciting at the same time!”
— Jennifer Jones, Bookmiser, Roswell, GA

In this second installment in the New York Times bestselling series from Edgar Award winner James Ponti, the young group of spies returns for another international adventure perfect for fans of Spy School and Mrs. Smith’s Spy School for Girls.

After thwarting a notorious villain at an eco-summit in Paris, the City Spies are gearing up for their next mission. Operating out of a base in Scotland, this secret team of young agents working for the British Secret Intelligence Service’s MI6 division have honed their unique skills, such as sleight of hand, breaking and entering, observation, and explosives. All of these allow them to go places in the world of espionage where adults can’t.

Fourteen-year-old Sydney is a surfer and a rebel from Bondi Beach, Australia. She’s also a field ops specialist for the City Spies. Sydney is excited to learn that she’ll be going undercover on the marine research vessel the Sylvia Earle. But things don’t go exactly as planned, and while Sydney does find herself in the spotlight, it’s not in the way she was hoping.

Meanwhile, there’s been some new intel regarding a potential mole within the organization, offering the spies a lead that takes them to San Francisco, California. But as they investigate a spy who died at the Botanical Gardens, they discover that they are also being investigated. And soon, they’re caught up in an exciting adventure filled with rogue missions and double agents!

This mission is hot! The City Spies are a go!

James Ponti is the New York Times bestselling author of three middle grade book series: the all-new City Spies, about an unlikely squad of five kids from around the world who form an elite MI6 Spy Team; the Edgar Award–winning Framed! series, about a pair of tweens who solve mysteries in Washington, DC; and the Dead City trilogy, about a secret society that polices the undead living beneath Manhattan. His books have appeared on more than fifteen different state award lists and he is the founder of a writers group known as the Renegades of Middle Grade. James is also an Emmy–nominated television writer and producer who has worked for many networks including Nickelodeon, Disney Channel, PBS, History, and Spike TV, as well as NBC Sports. He lives with his family in Orlando, Florida. Find out more at JamesPonti.com.