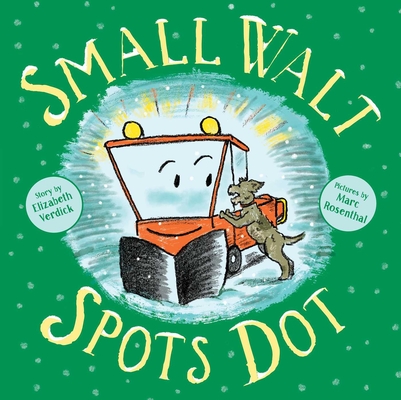 Small Walt meets a stray puppy in this irresistible companion to Small Walt, which Kirkus Reviews called “charming and endearing” in a starred review.

We’re Gus and Walt.
We plow and salt.
No job’s too small.
We give our all!

Walt and his driver Gus are plowing a parking lot when the see—whoa! What’s that? A blur of fur! Pup on the loose! Can snowplow Small Walt and driver Gus save the stray and save the day?

Elizabeth Verdick has written more than thirty books for toddlers to teens. She collaborated with Marc Rosenthal on Small Walt, which Kirkus Reviews called “reminiscent of Virginia Burton’s classics” in a starred review; and its sequel, Small Walt and Mo the Tow. She is also the author of Bike & Trike, illustrated by Brian Biggs. She is a graduate of the Hamline University MFA program and lives in Woodbury, Minnesota. Learn more at ElizabethVerdick.com.

Marc Rosenthal is the New York Times bestselling illustrator of many books for children, including Small Walt by Elizabeth Verdick; the Bobo series by Eileen Rosenthal; The Straight Line Wonder by Mem Fox; and Phooey!, which he wrote. Marc’s illustrations can be seen regularly in The New Yorker, Time, Forbes, Fortune, The Atlantic, The New York Times, The Boston Globe, The Washington Post, and others. Visit him online at Marc-Rosenthal.com.

Will the eponymous, anthropomorphic snowplow and his driver, Gus, be able to help a stray dog in the snowy city?

Of course, the resounding answer is yes—and with their characteristic teamwork and compassion. As always, the fun of watching the team do their careful work of plowing in areas too tight for the larger plows is enhanced by simple sentences, easily learned jingles, and plenty of onomatopoeia. In this episode, astute viewers will notice signs of the dog before Walt does; he in turn is ahead of Gus. When Gus—who presents as white—calls for help in rescuing the dog, a police SUV named Bea shows up with her dark-skinned, female driver, Officer Chance. Young readers are again given opportunities to speculate and predict: Will Walt’s open cab door help the humans as they stumble about, trying to catch the “blur of fur”? The climactic chase scene ends with the SUV taking the dog away, acknowledging Walt’s contribution: “Take a bow, plow.” Later, Gus drives a somewhat saddened Walt to the animal shelter. The anticipated ending includes a new rhyme that presents the new threesome. The retro-style illustrations include diversity in humans. As in previous books, universally lauded human values come through with no trace of didacticism. And the carefully crafted sentences with limited, repetitive vocabulary work well for both beginning readers and the read-aloud crowd. (This book was reviewed digitally with 9-by-18-inch double-page spreads viewed at actual size.)