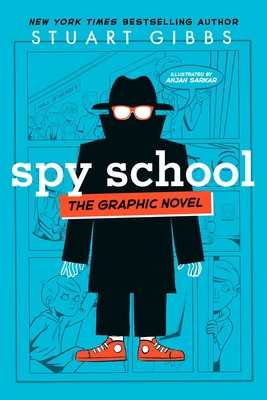 Ben Ripley may only be in middle school, but he’s already pegged his dream job: CIA or bust. Unfortunately for him, his personality doesn’t exactly scream “secret agent.” In fact, Ben is so awkward, he can barely get to school and back without a mishap. Because of his innate nerdiness, Ben is not surprised when he is recruited for a magnet school with a focus on science—but he’s entirely shocked to discover that the school is actually a front for a junior CIA academy. Could the CIA really want him?

Actually, no. There’s been a case of mistaken identity—but that doesn’t stop Ben from trying to morph into a supercool undercover agent, the kind that always gets the girl. And through a series of hilarious misadventures, Ben realizes he might actually be a halfway decent spy…if he can survive all the attempts being made on his life! With action-packed, eye-catching art, join Ben Ripley as he survives his first year at the Academy of Espionage.

Stuart Gibbs is the New York Times bestselling author of the Charlie Thorne series, FunJungle series, Moon Base Alpha series, Once Upon a Tim series, and Spy School series. He has written screenplays, worked on a whole bunch of animated films, developed TV shows, been a newspaper columnist, and researched capybaras (the world’s largest rodents). Stuart lives with his family in Los Angeles. You can learn more about what he’s up to at StuartGibbs.com.

Anjan Sarkar’s preferred illustration style is “wonky and slightly misshapen,” which he realized around the time that he started drawing with his children (who are masters of the wonky line). His work is influenced by illustrators like David McKee, Jill McDonald, and Maurice Sendak, whose books he read as a little person. Anjan is also unhealthily obsessed with a few contemporary illustrators such as Benjamin Chaud, Sara Ogilvie, and Neal Layton. Since becoming a full-time illustrator, he’s created illustration for children’s books, animation, and advertising. Anjan works from a little studio in his house in Sheffield, England, where he lives with his wife and two kids.