Kind of Sort of Fine (Paperback) 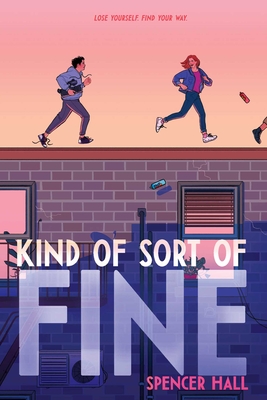 Senior year changes everything for two teens in this poignant, funny coming-of-age story that looks at what happens when the image everyone has of us no longer matches who we really are.

Senior year of high school is full of changes.

For Hayley Mills, these changes aren’t exactly welcome. All she wants is for everyone to forget about her very public breakdown and remember her as the overachiever she once was—and who she’s determined to be again. But it’s difficult to be seen as a go-getter when she’s forced into TV Production class with all the slackers like Lewis Holbrook.

For Lewis, though, this is going to be his year. After a summer spent binging 80s movies, he’s ready to upgrade from the role of self-described fat, funny sidekick to leading man of his own life—including getting the girl. The only thing standing in his way is, well, himself.

When the two are partnered up in class, neither is particularly thrilled. But then they start making mini documentaries about their classmates’ hidden talents, and suddenly Hayley is getting attention for something other than her breakdown, and Lewis isn’t just a background character anymore. It seems like they’re both finally getting what they want—except what happens when who you’ve become isn’t who you really are?

Spencer Hall graduated from the University of the Cumberlands in Kentucky in with a BS in English. He moved to Chicago to study improv, but soon realized when it came to being funny, he was better at writing things down than making them up on the spot. When he’s not writing, he can be found running by the lake, occasionally performing stand-up comedy at poorly attended open mic nights, and researching how to become a professional mini-golf player. Kind of Sort of Fine is his first novel.