Rima's Rebellion: Courage in a Time of Tyranny (Hardcover) 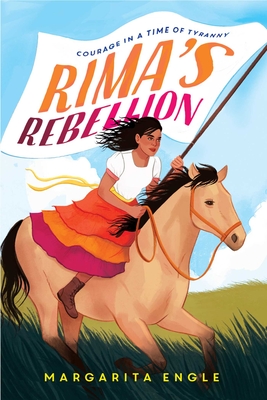 An inspiring coming-of-age story told in prose and “spare, lyrical” verse (The Horn Book Magazine) from award-winning author Margarita Engle about a girl falling in love for the first time while finding the courage to protest for women’s right to vote in 1920s Cuba.

Rima loves to ride horses alongside her abuela and Las Mambisas, the fierce women veterans who fought during Cuba’s wars for independence. Feminists from many backgrounds have gathered in voting clubs to demand suffrage and equality for women, but not everybody wants equality for all—especially not for someone like Rima. In 1920s Cuba, illegitimate children like her are bullied and shunned.

Rima dreams of a day when she is free from fear and shame, the way she feels when she’s riding with Las Mambisas. As she seeks her way, Rima forges unexpected friendships with others who long for freedom, especially a handsome young artist named Maceo. Through turbulent times, hope soars, and with it…love.

Margarita Engle is the Cuban American author of many books including the verse novels Rima’s Rebellion; Your Heart, My Sky; With a Star in My Hand; The Surrender Tree, a Newbery Honor winner; and The Lightning Dreamer. Her verse memoirs include Soaring Earth and Enchanted Air, which received the Pura Belpré Award, a Walter Dean Myers Award Honor, and was a finalist for the YALSA Award for Excellence in Nonfiction, among others. Her picture books include Drum Dream Girl, Dancing Hands, and The Flying Girl. Visit her at MargaritaEngle.com.

"Engle’s lyrical poems take various forms, and despite the fictional tale, the fight for women’s rights in Cuba is based on history and reflective of many of today’s social struggles. Rima’s passion and courage is sure to inspire today’s readers to take up their own fight for equality and justice."

"As Engle’s absorbing verse novel opens in Cuba, 1923, narrator Rima is growing up in a household of three strong women . . . Engle smoothly inserts enough historical context to demonstrate how grievously the political/social/Church deck was stacked against Cuban women’s progress."
— The Bulletin of the Center for Children's Books

"This historical novel in verse, set mainly in 1920s Cuba, is an engrossing look at the protracted fight for women’s suffrage there. . . Engle’s spare, lyrical writing and the believable human emotions shown through Rima’s individual perspective bring to life the complex fight for equality and civil rights."
— Horn Book Magazine

"Fast-moving free-verse lines encapsulate Rima’s voice and the bravery she displays throughout this feminist journey to self-worth and women’s equality."
— Publishers Weekly