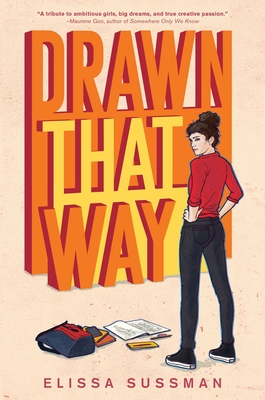 “Packs a swoony punch along with its feminist rage.” —Maurene Goo, author of Somewhere Only We Know

Moxie meets the world of animation in this fresh, unputdownable novel about a teen girl determined to prove herself in the boys’ club of her dream industry no matter what it takes.

Hayley Saffitz is confident, ambitious, and intent on following in the footsteps of her hero, renowned animation director, Bryan Beckett. When she’s given a spot in his once-in-a-lifetime summer program, Hayley devises a plan: snag one of the internship’s coveted directing opportunities. Dazzle Bryan with her talent. Secure a job post-graduation. Live her dream.

Except she doesn’t land one of the director positions. All of those go to boys. And one of them is Bryan’s son, Bear. Despite Bear’s obvious apathy for the internship, Hayley soon realizes that there’s more to him than she expected. As they work together, the animosity between them thaws into undeniable chemistry and maybe something…more.

But Hayley can’t stop thinking about the chance she was refused.

Determined to make a name for herself, Hayley recruits the five other young women in the program to develop their own short to sneak into the film festival at the end of the summer. As the internship winds down, however, one question remains: Will Hayley conform to the expectations of her idol, or will she risk her blossoming relationship with Bear—and her future—to prove that she’s exactly as talented as she thinks she is?

Elissa Sussman is a bestselling author of books for adults and teens. She received her BA from Sarah Lawrence College, her MFA from Pacific University, and in a previous life managed animators and organized spreadsheets at some of the best animation studios in the world, including Nickelodeon, Disney, DreamWorks Animations, and Sony Picture Imageworks. You can find her name in the credits of The Croods, Hotel Transylvania, The Princess and the Frog, and Tangled. In addition to Drawn That Way, she is the author of the YA fairy tales Stray and Burn, and the adult novel, Funny You Should Ask. She lives in Los Angeles with her family.

Arielle Jovellanos is a Filipina American freelance illustrator, writer, and comic artist based in New York. She specializes in narrative illustrations with an eye for character interaction and cute clothing. Her work includes the graphic novels Black Star by Eric Anthony Flover and Evil Thing: A Villains Graphic Novel and has also been featured in magazines, comics, books, and branded social media campaigns. Arielle is currently adjunct faculty in the illustration department at the Fashion Institute of Technology. Outside of work, she loves sitcoms, showtunes, superheroes, succulents, and storytelling structure (also alliteration, apparently). Find out more at Arielle-Jovellanos.com.

"Brimming with authenticity, from the intricate details of an animation studio to the complicated feelings of a teen crush, each page of this charming romp is unmissable."
— Victoria Ying, author of City of Secrets

"Radical and deeply relatable, Drawn That Way is a fierce and feminist romance must-read."
— Sam Maggs, author of The Fangirl’s Guide to the Galaxy

"Drawn That Way is the book I wish I read as a teen. It packs a swoony punch along with its feminist rage, and I couldn’t put it down. Sussman has written a book that does so much work but makes it look effortless—like the best stories out there."
— Maurene Goo, author of Somewhere Only We Know

"Sharp, surprising, and a little bit sexy, Drawn That Way is a clear-eyed look at a girl with ambition and the subtle, insidious power structures designed to stand in her way. I haven’t read anything else quite like it."
— Katie Cotugno, New York Times bestselling author of 99 Days

"Drawn That Way is as fierce and charming as its heroine. Elissa Sussman has written a timely, compelling story about love, creativity, and the fire of ambition, driven by equal parts heat and heart. I loved this book, and wish I could give it to my teenage self, and all the girls who are trying to figure out what it means to want their work to be acknowledged, and how to be loved in all of their messy, complicated glory."
— Zan Romanoff, author of Look

"Elissa Sussman puts everything on the page for her main character Hayley, a teenager who only wants one thing: to direct her own short film during an internship at her favorite animation studio. Hayley's journey has everything — from the all too familiar sense of impostor syndrome to figuring out how to succeed in a world that wants to pretend you don't exist. Plus, the book is littered with wonderful illustrations by Arielle Jovellanos that perfectly complement Sussman's already clever and compelling text. Drawn That Way is a funny, sweet, and absolutely heart wrenching novel for anyone who has ever just wanted to be seen."
— Preeti Chhibber, author of Marvel’s Avengers Assembly and co-host of Desi Geek Girls