Aristotle and Dante Dive into the Waters of the World (Hardcover) 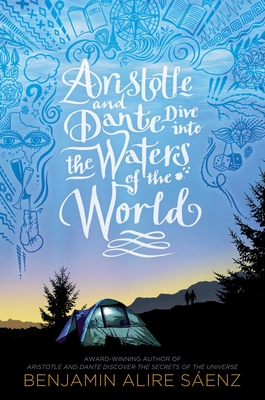 “The sequel to Aristotle and Dante Discover the Secrets of the Universe explores the complicated aspects of relationships, cultural and societal expectations, and the machismo of Latinx culture. This book gives a worthy follow-up to the teen couple.”
— Gerard Villegas, Warwick's, La Jolla, CA

The highly anticipated sequel to the critically acclaimed, multiple award-winning novel Aristotle and Dante Discover the Secrets of the Universe is an “emotional roller coaster” (School Library Journal, starred review) sure to captivate fans of Adam Silvera and Mary H.K. Choi.

In Aristotle and Dante Discover the Secrets of the Universe, two boys in a border town fell in love. Now, they must discover what it means to stay in love and build a relationship in a world that seems to challenge their very existence.

Ari has spent all of high school burying who he really is, staying silent and invisible. He expected his senior year to be the same. But something in him cracked open when he fell in love with Dante, and he can’t go back. Suddenly he finds himself reaching out to new friends, standing up to bullies of all kinds, and making his voice heard. And, always, there is Dante, dreamy, witty Dante, who can get on Ari’s nerves and fill him with desire all at once.

The boys are determined to forge a path for themselves in a world that doesn’t understand them. But when Ari is faced with a shocking loss, he’ll have to fight like never before to create a life that is truthfully, joyfully his own.

Benjamin Alire Sáenz is an author of poetry and prose for adults and teens. He was the first Hispanic winner of the PEN/Faulkner Award and a recipient of the American Book Award for his books for adults. He is the author of Aristotle and Dante Discover the Secrets of the Universe, which was a Printz Honor Book, the Stonewall Award winner, the Pura Belpré Award winner, the Lambda Literary Award winner, and a finalist for the Amelia Elizabeth Walden Award, and its sequel, Aristotle and Dante Dive into the Waters of the World. His first novel for teens, Sammy and Juliana in Hollywood, was an ALA Top Ten Book for Young Adults and a finalist for the Los Angeles Times Book Prize. His second book for teens, He Forgot to Say Goodbye, won the Tomás Rivera Mexican American Children’s Book Award, the Southwest Book Award, and was named a New York Public Library Book for the Teen Age. He lives in El Paso, Texas.

"Aristotle and Dante Dive into the Waters of the World is a joyous and heartrending exploration of grief, love and queer belonging."
— Shelf Awareness Pro

"Sáenz himself is something of a cartographer, drawing an intricate map of the human heart. The result is a brilliant, character-driven novel that challenges its readers themselves to think about life while falling in love with those two unforgettable characters, Aristotle and Dante."
— Booklist, starred review

"In Sáenz’s careful, poetic hands and Ari’s stubborn, searching voice, the narrative follows the Mexican American couple as they “map out a new world” together, navigating desire, homophobia, racism, sexism, how to be a man without succumbing to toxic masculinity, how to cope with loss without giving in to grief, what it means to have—and be—a good teacher, and, fundamentally, how to love and be loved."
— Publishers Weekly, starred review

“The epic queer love story that’s been nine years in the making is worth the wait.”
— Entertainment Weekly

"Sáenz once again applies wisdom and humor to familiar themes such as forgiveness and redemption, the value of teachers and mentors, and the definitions of valor and manhood."
— Horn Book Magazine