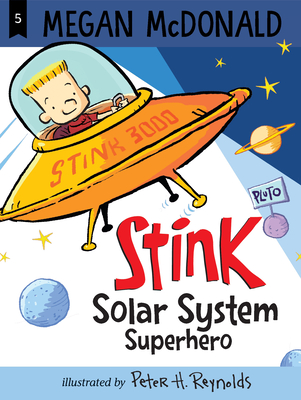 This is book number 5 in the Stink series.

Save the planet . . . Pluto! Stink Moody, wise-cracking champion of everything small, is on a new mission: to reinstate his favorite celestial orb.

Look! Up in the sky! Is it a falling leaf ?
A speck of dust? A speeding mosquito?
No, it’s Stink Moody, Solar System Superhero!

When Stink learns that Pluto has flunked out of the Milky Way for being too shrimpy, he feels like he might just explode with a Big Bang. Stink has no choice but to take a stand for the sake of little planets (and little people) everywhere. Will he be smart enough to defeat a panel of big-shot scientists? Will he be strong enough to beat know-it-all Riley Rottenberger and her "Team KPB"? Will he succeed in rescuing Pluto from a fate worse than being swallowed by a black hole? Start the countdown for a funny (and very informative) out-of-this-world adventure — and prepare to have your universe rocked!

Astrophysics facts combine with everyday second-grade school experiences in this lively chapter book in the Stink series. . . .The funny words (“double freaky-deaky”) and silly scenarios, illustrated in Reynolds’ wry, informative black-and-white drawings, make for a fast read about the triumph of the little guy and the wonders of the universe.
—Booklist

Stink is an entertaining character and his audience will appreciate his jokes. The series of solar-system comics are likely to pull reluctant readers into the story while offering fun trivia about the solar system–including Pluto.
—School Library Journal