The Skeptics' Guide to the Future: What Yesterday's Science and Science Fiction Tell Us About the World of Tomorrow (Hardcover) 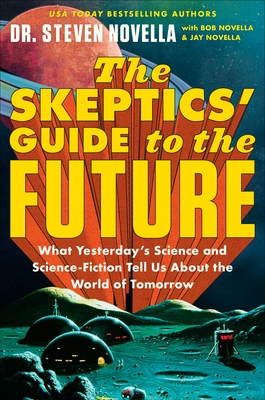 From the bestselling authors and hosts of "The Skeptics' Guide to the Universe," a high-tech roadmap of the future in their beloved voice, cracking open the follies of futurists past and how technology will profoundly change our world, redefining what it means to be human.

Our predictions of the future are a wild fantasy, inextricably linked to our present hopes and fears, biases and ignorance. Whether they be the outlandish leaps predicted in the 1920s, like multi-purpose utility belts with climate control capabilities and planes the size of luxury cruise ships, or the forecasts of the ‘60s, which didn’t anticipate the sexual revolution or women’s liberation, the path to the present is littered with failed predictions and incorrect estimations. The best we can do is try to absorb the lessons from futurism's checkered past, perhaps learning to do a little better.

In THE SKEPTICS' GUIDE TO THE FUTURE, Steven Novella and his co-authors build upon the work of futurists of the past by examining what they got right, what they got wrong, and how they came to those conclusions. By exploring the pitfalls of each era, they give their own speculations about the distant future, transformed by unbelievable technology ranging from genetic manipulation to artificial intelligence and quantum computing. Applying their trademark skepticism, they carefully extrapolate upon each scientific development, leaving no stone unturned as they lay out a vision for the future.

Dr. Steven Novella is an academic clinical neurologist at Yale University School of Medicine and is host and producer of "The Skeptics’ Guide to the Universe" (SGU). He also co-hosts "Alpha Quadrant 6," a science-fiction review show. He is the author of the bestselling book The Skeptics Guide to the Universe: How to Know What’s Really Real in a World Increasingly Full of Fake. Dr. Novella has made multiple appearances on NPR’s All Things Considered and is a frequent guest on radio talk shows and science podcasts. His television credits include The Dr. Oz Show, Penn & Teller Bullshit, 20/20, Inside Edition, The History Channel, The Unexplained on A&E, Ricki Lake, and Exploring the Unknown. When not podcasting, he also authors the popular and award-winning NeuroLogica blog and is senior editor of Science-Based Medicine, an influential medical blog dedicated to issues of science and medicine. Dr. Novella is the founder and president of the New England Skeptical Society, a fellow of the Committee for Skeptical Inquiry (CSI), and founding chairman of the Institute for Science in Medicine.

Bob Novella is a co-host of SGU and co-author ofThe Skeptics Guide to the Universe: How to Know What’s Really Real in a World Increasingly Full of Fake. He also blogs for SGU’s Rogues Gallery. Bob is founder and vice president of the New England Skeptical Society. He has written numerous articles that are widely published in skeptical literature and is a frequent guest on science and technology podcasts.

Jay Novella is a co-host of the SGU podcast, Chief Operations Officer at SGU Productions, and co-author of the bestselling book The Skeptics Guide to the Universe: How to Know What’s Really Real in a World Increasingly Full of Fake. Jay serves on the board of directors for the Northeast Conference on Science and Skepticism (NECSS), a yearly conference in its 14th year. He also is a producer and writer for the stage show A Skeptical Extravaganza of Special Significance. In his free time, Jay produces and hosts Alpha Quadrant 6, a science-fiction review show.

“Steve Novella and crew are serious, knowledgeable nerds. They use their critical thinking skills to analyze what is and isn’t possible . . . or likely. Along with some remarkable insights, they’ve written a little science-based fiction of their own that is a delight to read. It’s a well-researched, well-reasoned reference book.”—Bill Nye, CEO, the Planetary Society

NAMED A BEST SCIENCE BOOK OF 2022 BY BARNES & NOBLE

"A gimlet-eyed look at the promises of technology and futurists past. . . An intriguing if bet-hedging work of futurology that calls into question the whole business of futurology itself.”—Kirkus Reviews

"A fun overview of both the current state of modern science and a general survey of the history of futurism.”—Booklist

"I think that anyone who has been fascinated with the future, as I assume most people have at one time or another, should check out The Skeptics Guide to the Future. . . [I]t gives such an interesting take and view in which we should all look at the future. The realist perspective created more hope in me because it felt like the trajectory presented was achievable because of the building blocks already around."—Cosmic Circus

PRAISE FOR SKEPTICS' GUIDE TO THE UNIVERSE

"A lively, engaging, and very timely guide to navigating a world rife with misinformation and pseudoscience. This book will give you the tools to ferret out nonsense and confront your own biases-and hopefully change a few minds along the way."—Jennifer Oullette, author of Me, Myself, and Why and The Calculus Diaries

"[Novella] pulls no punches in his attack on the misinformation, myths, and biases that surround us. Aided here by several writing associates, the author demonstrates his vast experience explaining the mechanisms of deception and the tactics used by pseudoscientists. Presented as "one giant inoculation against bad science, deception, and faulty thinking," the book succeeds superbly."—Kirkus (starred review)

"Empowering and illuminating, this thinker's paradise is an antidote to spreading anti-scientific sentiments. Readers will return to its ideas again and again."—Publishers Weekly (starred review)