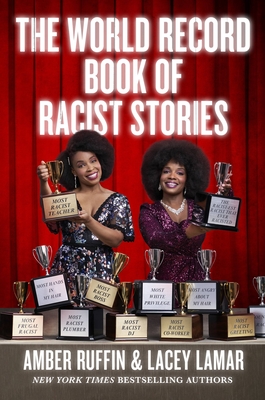 A new collection of hilarious, intergenerational anecdotes full of absurd detail about everyday experiences of racism from the New York Times bestselling authors of You’ll Never Believe What Happened to Lacey, comedian Amber Ruffin and her sister Lacey.

Families may not always see eye to eye; we get on each other’s nerves, have different perspectives and lives—especially when we consider how we've grown up in different generations. But for the Ruffin family and many others, there has been one constant that connects them: racism hasn’t gone anywhere.

From her raucous musical numbers to turning upsetting news into laughs as the host of The Amber Ruffin Show or in her Late Night with Seth Meyers segments, Amber is no stranger to finding the funny wherever she looks. With equal parts heart and humor, she and her sister Lacey Lamar shared some of the eye-opening and outrageous experiences Lacey had faced in Nebraska in their first book. Now, the dynamic duo makes it clear—Lacey isn’t the only one in the family with ridiculous encounters to share! Amber and Lacey have many more uproarious stories, both from their own lives and the entire Ruffin family.

Recounting the wildest tales of racism from their parents, their siblings, and Amber’s nieces and nephews, this intergenerational look at ludicrous (but all too believable) everyday racism as experienced across age, gender, and appearance will have you gasping with shock and laughter in turn. Validating for anyone who has first-hand experience, and revealing for anyone who doesn’t, Amber and Lacey’s next book helps us all find the absurdity in the pervasive frustrations of racism. Illuminating and packed with love and laughter, this is a must-read for just about everyone.

Amber Ruffin is the host of The Amber Ruffin Show on NBC's streaming service, Peacock, and a writer and cast member on NBC's Late Night with Seth Meyers. She also amazingly became the first black woman to write for a late-night talk show in American history when she joined Seth's staff in 2014, and was a writer/sometimes performer on HBO's Black Lady Sketch Show.

Lacey Lamar is Amber Ruffin’s big sister. After years of working for her community, she has landed in a profession where she helps immigrants find work in their new country. Living in Nebraska, Lacey loves the challenge of creating safe spaces for the celebration of Nerd/African-American culture.

"Thank you again to the Ruffin sisters for stuffing ten pounds of truth in a (funny!) five pound bag."—Tina Fey

"A perfect follow-up to the authors’ You’ll Never Believe What Happened to Lacey . . .  The banter between the sisters is consistently funny, but the underlying social commentary remains incisive . . .  An excellent look at lived experiences of Black Americans that should be required reading for all Americans."—Kirkus, Starred Review

"Told with humor and headshakes . . . A great book to give someone who loves to laugh and learn at the same time."—BookRiot

"To read stories you won't soon forget, told in a totally memorable way by some very funny and generous writers, check out The World Record Book of Racist Stories." —BookPage

Praise for You'll Never Believe What Happened to Lacey:

"The book is a portrait of one person’s struggle to maintain dignity, strength and self-respect when faced with injustices small and large—all told with Ruffin’s irreverent, sardonic style."—People

“This timely and timeless book is hilarious, insightful, aggravating and comforting in equal measure.”—Salon

"I
dare you to read this hilarious and eye-opening book and not become obsessed
with Amber Ruffin."—Mindy Kaling

"A must-read that will have Black women feeling seen and heard, and will allow others to better understand the effects of racism. With YA crossover appeal, this is also an excellent choice for book clubs."—Library Journal (starred review)