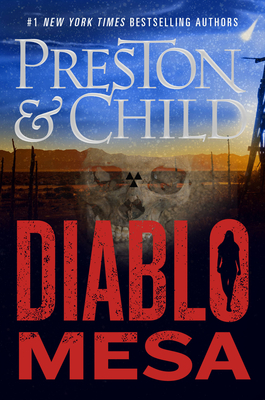 Lucas Tappan, a wealthy and eccentric billionaire and founder of Icarus Space Systems, approaches the Santa Fe Archaeological Institute with an outlandish proposal—to finance a careful, scientific excavation of the Roswell Incident site, where a UFO is alleged to have crashed in 1947. A skeptical Nora Kelly, to her great annoyance, is tasked with the job.

Nora's excavation immediately uncovers two murder victims buried at the site, faces and hands obliterated with acid to erase their identities. Special Agent Corrie Swanson is assigned to the case. As Nora’s excavation proceeds, uncovering things both bizarre and seemingly inexplicable, Corrie’s homicide investigation throws open a Pandora's box of espionage and violence, uncovering bloody traces of a powerful force that will stop at nothing to protect its secrets—and that threatens to engulf them all in an unimaginable fate.

The thrillers of Douglas Preston and Lincoln Child "stand head and shoulders above their rivals" (Publishers Weekly). Preston and Child's Relic and The Cabinet of Curiosities were chosen by readers in a National Public Radio poll as being among the one hundred greatest thrillers ever written, and Relic was made into a number‑one box office hit movie. They are coauthors of the famed Pendergast series, and their recent novels include Bloodless, The Scorpion’s Tail, Crooked River, Old Bones, and Verses for the Dead. In addition to his novels, Preston writes about archaeology for the New Yorker and Smithsonian magazines. Child is a Florida resident and former book editor who has published seven novels of his own, including such bestsellers as Full Wolf Moon and Deep Storm. Readers can sign up for The Pendergast File, a monthly "strangely entertaining note" from the authors, at their website, www.PrestonChild.com. The authors welcome visitors to their Facebook page, where they post regularly.

“Diablo Mesa is thriller-adventure writing of the absolute highest order that takes Preston and Child back to their high-concept roots... It reads like a hybrid of the best from Wilbur Smith and Alistair MacLean, making for flat-out great reading entertainment.”—Providence Sunday Journal

“Excellent… The taut suspense and tight plotting that marked the authors’ earliest Pendergast novels are very much in evidence. Fans of kick-ass female leads will be delighted.”—Publishers Weekly (Starred Review)

“The last third of the novel is not to be missed and is impossible to put down. Everything from Cold War espionage to Soviet agents at Roswell and, of course, our top-secret group that is behind all of this will cause enough suspense and unpredictable thrills that you will not be able to see the next move coming before Preston & Child cast a literary checkmate. Diablo Mesa is just what thriller junkies require, and this always reliable author duo delivers at every turn.”—Bookreporter

“Diablo Mesa is thriller-adventure writing of the absolute highest order that takes Preston and Child back to their high-concept roots in books like Mount Dragon and Thunderheart. It reads like a hybrid of the best from Wilbur Smith and Alistair MacLean, making for flat-out great reading entertainment.”—BookTrib

“Diablo Mesa touches upon one of the most enduring and popular topics of the past 70 years… a great hook.”—The Big Thrill

“Preston & Child are back with a thrilling, excellent third novel…  Nobody writes like these two and this book keeps you the edge as you read along with the adventure.”
—Red Carpet Crash

Praise for the Nora Kelly series——

"The two strong female protagonists [Nora Kelly and Corrie Swanson] share a dynamic reminiscent of that between Pendergast and his friend on the NYPD, Vincent D'Agosta."—Publishers Weekly

"Long-time readers of Preston and Child will love to see the beloved characters of Nora Kelly and Corrie Swanson take center stage in what is a terrific start to a new series. Their writing talent shines as this mix of history, exploration of nature and crime will without a doubt land on the top of the best-seller lists. Though some of the historical facts have been tweaked a bit for the story to work, a note to the reader from the authors at the end reveals what is true and what they made up, and is sure to lead to a surge in attention for non-fiction accounts of what really happened that horrible winter."—Associated Press

"Old Bones exceeds expectations at every juncture, a thriller extraordinaire that turns history upside down in forming the basis of a riveting and relentless tale."—Providence Sunday Journal

"This outing belongs to two dedicated women, whose future adventures will be happily anticipated."—Booklist

"From the thriller world's dynamic duo comes a new work of archeology, murder, and the Donner Party. This one should please longtime fans of Preston and Child, as well as new devotees drawn in by that ever-appealing set up of a past crime coming back to haunt the present."—CrimeReads

"Preston and Child have created a fine mix of fiction and historical fact. The story is peopled by complex and engaging characters with sometimes murky ambitions. . . The ending, which seems far-fetched, is definitely, disturbingly possible."—Booktrib

"Preston & Child is one of those "names" on a book that make you want to set everything else aside in order to read what amazing words they've written [...] From the best writing team out there, you do not want to miss this book."—Suspense Magazine

"Old Bones has it all: chills, thrills and a blend of history, along with archaeological expertise you can only get from a Preston & Child novel. I loved spending time with Nora Kelly and Corrie Swanson, and look forward to seeing them in future adventures. Longtime readers will be rewarded not only by this pairing but by some other surprises leading up to the conclusion of this exciting read."—Bookreporter