The Rule of Laws: A 4,000-Year Quest to Order the World (Hardcover) 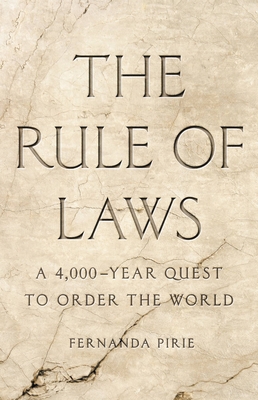 From ancient Mesopotamia to today, the epic story of how humans have used laws to forge civilizations

Rulers throughout history have used laws to impose order. But laws were not simply instruments of power and social control. They also offered ordinary people a way to express their diverse visions for a better world.

In The Rule of Laws, Oxford scholar Fernanda Pirie traces the rise and fall of the sophisticated legal systems underpinning ancient empires and religious traditions, while also showing how common people—tribal assemblies, merchants, farmers—called on laws to define their communities, regulate trade, and build civilizations. Although legal principles originating in Western Europe now seem to dominate the globe, the variety of the world’s laws has long been almost as great as the variety of its societies. What truly unites human beings, Pirie argues, is our very faith that laws can produce justice, combat oppression, and create order from chaos.

Fernanda Pirie is professor of the anthropology of law at the University of Oxford. She is the author of The Anthropology of Law and has conducted fieldwork in the mountains of Ladakh and the grasslands of eastern Tibet. She previously spent almost a decade practicing as a barrister at the London bar. She lives in Oxford, UK.

“In the course of her survey, Ms. Pirie, a professor of legal anthropology at Oxford, takes us on many an intriguing legal byway… [An] exceptionally rich narrative…”—Wall Street Journal

"In this panoramic history, Pirie tells the story of the rise and fall of systems of law across the civilizations, empires, and societies of the ancient and modern world."—Foreign Affairs

“[Pirie’s] collection of stories offers a comprehensive insight into how civilizations were founded and ruled… Furthermore, it bolsters our appreciation for the laws at our civilization’s foundational structure.”—Roanoke Times

“A valuable study for students of the law and its evolution over the millennia."—Kirkus Reviews

“An intriguing synthesis of the history of global legal codes and their origins.”—Library Journal

"The Rule of Laws is a fascinating, comprehensive study that forces us to think again about what law is, and why it matters. Far from being a dry set of rules, Fernanda Pirie argues, law is nothing less than a way of creating order and civilization. For those who want to understand why human society has emerged as it has, this is essential reading.”—Rana Mitter, University of Oxford

"The Rule of Laws offers a pathbreaking and stimulating account of how societies across different regions and epochs drew upon secular, sacred, and scholarly traditions to create laws that organized the lives of their citizens. Pirie leads readers across five millennia to show the diverse and sophisticated legal systems developed in states across Europe, Africa, Asia, and the Americas before explaining how the European-derived legal structures of our time achieved a rather unlikely and historically anomalous global dominance. This expansive narrative challenges what we think we know about legal history and the assumptions we make about law’s future.”—Edward J. Watts, author of Mortal Republic: How Rome Fell into Tyranny