The Constitution in Jeopardy: An Unprecedented Effort to Rewrite Our Fundamental Law and What We Can Do About It (Hardcover) 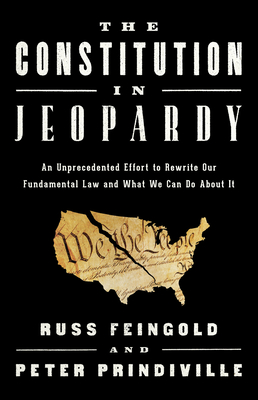 A former U.S. senator joins a legal scholar to examine a hushed effort to radically change our Constitution, offering a warning and a way forward.Over the last two decades, a fringe plan to call a convention under the Constitution's amendment mechanism—the nation's first ever—has inched through statehouses. Delegates, like those in Philadelphia two centuries ago, would exercise nearly unlimited authority to draft changes to our fundamental law, potentially altering anything from voting and free speech rights to regulatory and foreign policy powers. Such a watershed moment would present great danger, and for some, great power.In this important book, Feingold and Prindiville distill extensive legal and historical research and examine the grave risks inherent in this effort. But they also consider the role of constitutional amendment in modern life. Though many focus solely on judicial and electoral avenues for change, such an approach is at odds with a cornerstone ideal of the Founding: that the People make constitutional law, directly. In an era defined by faction and rejection of long-held norms, The Constitution in Jeopardy examines the nature of constitutional change and asks urgent questions about what American democracy is, and should be.

As a lawmaker, diplomat, attorney, and professor, Russ Feingold has devoted his career to protecting the Constitution's bedrock guarantees. Serving nearly two decades in the United States Senate, Feingold was the only senator to vote against the Patriot Act, citing civil liberty concerns, and cosponsored the Bipartisan Campaign Reform Act (McCain-Feingold Act), the most important campaign finance reform in decades. He sat on the Senate Judiciary Committee and chaired its Sub-committee on the Constitution. Feingold has also served as a U.S. special envoy and taught at Stanford, Harvard, Yale, and Marquette Law Schools. He is now president of the American Constitution Society, the nation's leading progressive legal organization, and an affiliated scholar of the Stanford Constitutional Law Center. He is a recipient of the John F. Kennedy Profile in Courage Award. His previous book, While America Sleeps: a Wake-up Call for the Post-9/11 Era, was a New York Times bestseller.Peter Prindiville is a nonresident fellow at the Stanford Constitutional Law Center and an attorney based in Washington, D.C. He previously was a fellow on the Senate Judiciary Committee and a high school history and civics teacher. Prindiville earned a law degree from Stanford; master's degrees from Notre Dame and University College Cork, Ireland, where he was a Mitchell Scholar; and an undergraduate degree from Georgetown.

“A comprehensive, clear, and compelling study of the Constitution’s creation and contemporary influences. Vast in scope yet precise in its analysis, this accessible yet meticulous treatise will engage legal and political experts while attracting and enlightening a wide spectrum of concerned citizens. A richly rewarding examination of why understanding the past is key to shaping the future.”—Booklist, starred review

“A cogent, thoughtful argument about a topic that may be unfamiliar to many Americans.”—Kirkus Reviews

“Where The Constitution in Jeopardy really shines is the exhaustive detail it provides on the history of Article V from the Constitutional Convention to present day.  The book was very well researched and is presented in a way where one doesn’t need to be a constitutional scholar to understand and enjoy it. It is a great read for anyone who would like to increase their knowledge of the U.S. Constitution.”—In Congress

“Only a small number of Americans know what an Article V constitutional convention is. That needs to change—and fast. Feingold and Prindiville expose the underbelly of a national movement to overhaul the United States Constitution and radically change the nature of our democracy. Secrecy is their best friend, so patriotic citizens who want our Republic to survive must read this book.”—Larry Sabato, professor and director of the center for politics, University of Virginia

“Anyone concerned about the future of American constitutional democracy should read and share this deeply researched yet accessible book.”—Martha Minow, professor and former dean, Harvard Law School

“A page-turning and eye-opening examination of the many forces working to alter the bedrock foundation of our nation: the Constitution itself.”—Senator Cory Booker

“A much-needed wake-up call to those of us who sleep soundly in the belief that while the Constitution may be easy to reinterpret, it is actually very hard to amend. In fact, we learn from this eye-opening book that conservative legislators and their supporters are closing in on a never-used constitutional provision that allows states to summon into being a constitutional convention—a runaway convention for the twenty-first century that we should fear and work urgently to prevent. We are in the authors’ debt for getting our attention before it’s too late.”—Linda Greenhouse, senior research scholar in law, Yale Law School, and former Supreme Court correspondent, New York Times

“People left, right, and center are wondering whether our constitutional structure can hold in the face of extreme polarization, social media–driven attention spans, and growing distrust of institutions. This makes the Feingold-Prindiville book about constitutional amendment extraordinarily timely and welcome. Don’t let Feingold’s obvious politics fool you; this book will be useful across the spectrum.”—Michael McConnell, professor, Stanford Law School

“A well-crafted book about the history, relevance, challenges, and future of the Constitution’s amendment process. This book is for all citizens who want to better understand our Constitution and why it is the core and soul of our democracy.”—Senator Chuck Hagel, former secretary of defense

“This book masterfully and accessibly canvases history, portrays current events, and sketches out a variety of possible futures for this nation’s basic law—and thus for the United States itself. I would call it artistic but fear that it might then be hung on a wall—far better and more important that the book should become a major practical means of civic education, widely read, and debated among the engaged citizenry generally.”—Joseph D. Kearney, dean and professor of law, Marquette University Law School

“This book is essential reading for two quite different reasons. One is its acuity in examining the lack of clarity in the Constitution’s amendment procedure and its convention route. The other, though, is its equal acuity in noting that the country very much needs a long-overdue conversation about the adequacy of the Constitution for our twenty-first-century realities and that an all-important first step is to confront the problems of the amendment procedure itself, including the stumbling blocks it presents to adoption of needed changes.”—Sanford Levinson, professor of law and political science, University of Texas, and coauthor (with Cynthia Levinson) of Fault Lines in the Constitution

“Feingold and Prindiville have thrown a bright spotlight on a fascinating question that’s going to explode into the national consciousness.”—Sai Prakash, professor, University of Virginia School of Law

“In their fascinating, historically rich volume, Feingold and Prindiville offer both an urgent warning against the current right-wing movement for a new constitutional convention and a constructive framework for revising the amendment process itself to give ‘We, the People’ direct constitutional amendment power through processes designed to mitigate factionalism in the pursuit of constitutional change.”—Peter Shane, professor, Ohio State University Moritz College of Law

“This is an important book about a subject that we need to pay more attention to, Article V of the U.S. Constitution, which governs the process by which the Constitution can be amended. Feingold and Prindiville explain how the framers of the Constitution saw the amendment process as the best way for the people of the United States to ensure the document and the country’s continuing vitality. George Washington, for example, saw Article V as the middle way between the havoc of constant change and the danger of stagnation. The authors also discuss in detail some of the vital changes that constitutional amendments have brought about, such as the abolition of slavery, the establishment of an income tax, and the progress toward racial and gender equality.

At the same time, however, they alert us to two dangers relating to Article V, the first involving efforts by far-right activists to awaken its convention mechanism and capitalize on its ill-defined procedure, and the second, the possibility that, because of the difficulty of the amendment process and the fact that only twenty-seven amendments have been ratified in over two centuries, people will conclude that it is useless to even contemplate amending the Constitution. The authors also explain the defects in Article V itself. Ultimately, however, Feingold and Prindiville make clear that it is necessary not to succumb to passivity but rather to engage in a robust national conversation about Article V and the critical issues that it presents.”—Hon. Lynn Adelman, United States district judge

As we stand on the precipice of cataclysmic changes in constitutional law, Russ Feingold and Peter Prindiville intervene with a trenchant and informative discussion of the formal process for amending the Constitution. This book could not be more timely and urgent—it is appointment reading for anyone who cares about securing our democracy ourselves and for generations to come.—Melissa Murray, professor, New York University School of Law; legal analyst, MSNBC