Close Calls: How Eleven US Presidents Escaped from the Brink of Death (Hardcover) 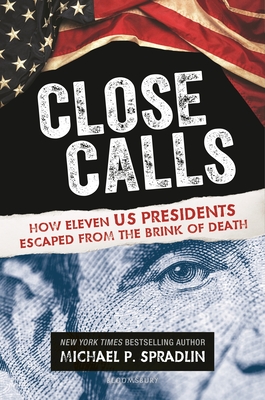 Historians tell the stories of tragic and untimely presidential deaths, but often forgotten are the near misses. JFK and his fellow servicemen spent six days on a desert island with only coconuts to eat after a deadly attack during WWII. Abe Lincoln was forced to take a train trip in disguise while America's first female detective worked to foil an early assassination attempt. And when Andrew Jackson was attacked by an upset citizen who had been stalking him for months, frontiersman Davey Crockett was the one to save him. With pacy, immediate writing and including supplemental archival photographs and archival materials, this book chronicles thrilling undertold stories of U.S. presidents' moments of bravery.

Michael P. Spradlin is the New York Times Bestselling and Edgar Award-nominated author of more than a dozen books for children, including the Western Heritage Award-winning Off like the Wind: The Story of the Pony Express. Spradlin grew up in Homer, Michigan and attended Central Michigan University where he graduated with a BS degree in History in 1982. He currently resides in Lapeer, Michigan with his wife, daughter, and two schnoodles Apollo and Willow.

"The quick chapters, snarky humor, and thrilling topic should be catnip for biography fans." - BCCB