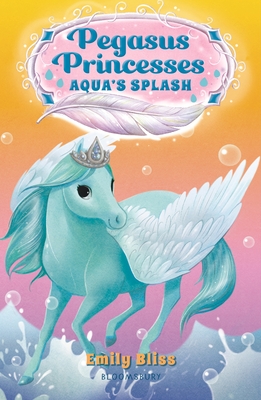 A high-flying new chapter book series from the creator of Unicorn Princesses!

Eight-year-old Clara is excited for another trip to the Wing Realm, the magical land of the Pegasus Princesses!

The merfairies' eggs are about to hatch, and Princess Aqua is thrilled--so thrilled, she has planned the Merthday Splash, an absolutely perfect event where Clara and the Pegasus Princesses can watch the baby merfairies swim out of their rainbow-colored shells. Aqua has done her best to make sure everything is ready: she's painted decorations, tried to teach her sisters to swim, and invited Clara, the Pegasus Princesses' favorite human girl, to the Wing Realm.

But when Lucinda knocks a jar of octopus ink into the merfairies' hatching pool, it suddenly seems they'll have to cancel the celebration. Can Clara help the Pegasus Princesses and the merfairies restore clean, clear water to the hatching pool and save the Merthday Splash?

Featuring adorable black-and-white illustrations throughout, this magical series is full of sparkle, fun, and friendship.

Emily Bliss lives just down the street from a forest. From her living room window, she can see a big oak tree with a magic keyhole. Like Cressida Jenkins, she knows that unicorns are real.