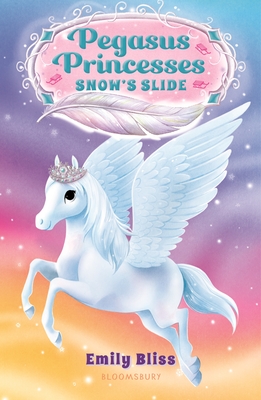 From the author of Unicorn Princesses, a high-flying chapter book series about a girl who goes on magical adventures with the Pegasus Princesses.

When Clara Griffin is playing in the forest near her home, she's thrilled to discover a magical silver feather and a flying armchair that transport her to the Wing Realm, the land of the pegasus princesses!
Princess Snow and her sisters are preparing for the Pegasus Winter Games-a day of magical sledding with their magical friends from the Snow Realm! Lucinda is in charge of the invitations, and when she accidentally invites the glow leopards to the games instead of the snow leopards, all the snow and ice is melted! Can Clara come up with a solution to help her friends beat the heat and restore the snowy fun?

Featuring black-and-white illustrations throughout and eye-catching, sparkly covers, this series is another must-have for chapter book readers.

Emily Bliss lives just down the street from a forest. From her living room window, she can see a big oak tree with a magic keyhole. Like Cressida Jenkins, she knows that unicorns are real.