Chaos: Charles Manson, the CIA, and the Secret History of the Sixties (CD-Audio) 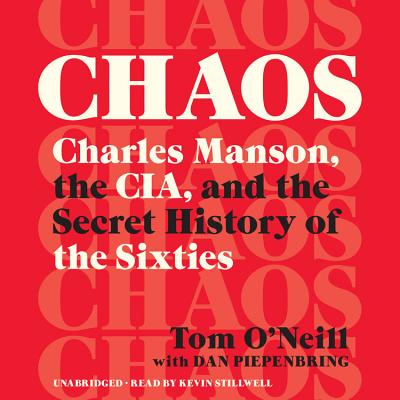 By Kevin Stillwell (Read by), Tom O'Neill, Dan Piepenbring (With)
$35.00
Call for price

A journalist's twenty-year fascination with the Manson murders leads to shocking new revelations about the FBI's involvement in this riveting reassessment of an infamous case in American history.
Over two grim nights in Los Angeles, the young followers of Charles Manson murdered seven people, including the actress Sharon Tate, then eight months pregnant. With no mercy and seemingly no motive, the Manson Family followed their leader's every order -- their crimes lit a flame of paranoia across the nation, spelling the end of the sixties. Manson became one of history's most infamous criminals, his name forever attached to an era when charlatans mixed with prodigies, free love was as possible as brainwashing, and utopia -- or dystopia -- was just an acid trip away.
Twenty years ago, when journalist Tom O'Neill was reporting a magazine piece about the murders, he worried there was nothing new to say. Then he unearthed shocking evidence of a cover-up behind the "official" story, including police carelessness, legal misconduct, and potential surveillance by intelligence agents. When a tense interview with Vincent Bugliosi -- prosecutor of the Manson Family and author of Helter Skelter -- turned a friendly source into a nemesis, O'Neill knew he was onto something. But every discovery brought more questions:

O'Neill's quest for the truth led him from reclusive celebrities to seasoned spies, from San Francisco's summer of love to the shadowy sites of the CIA's mind-control experiments, on a trail rife with shady cover-ups and suspicious coincidences. The product of two decades of reporting, hundreds of new interviews, and dozens of never-before-seen documents from the LAPD, the FBI, and the CIA, Chaos mounts an argument that could be, according to Los Angeles Deputy District Attorney Steven Kay, strong enough to overturn the verdicts on the Manson murders. This is a book that overturns our understanding of a pivotal time in American history.

Tom O'Neill is an award-winning investigative journalist and entertainment reporter whose work has appeared in national publications such as Us, Premiere, New York, the Village Voice, and Details. He graduated with a Bachelor in Fine Arts from New York University's Tisch School of the Arts and currently resides in Venice, CA.

“This is a book I can wholeheartedly recommend…It’s fucking amazing…This shit goes deep and it’s fascinating.”—Joe Rogan

"What if everything we thought we knew about the Manson murders was wrong? O'Neill spent 20 years wrestling with that question, and Chaos is his final answer. Timed to the 50th anniversary of the Manson murders, it's a sweeping indictment of the Los Angeles justice system, with cover-ups reaching all the way up to the FBI and CIA."—Entertainment Weekly

"Chaos is less a definitive account of the murders than a kaleidoscope swirl of weird discoveries and mind-bending hypotheticals that reads like Raymond Chandler after a tab of windowpane."—The New York Times

"If Helter Skelter whets your whistle, then O'Neill's blistering account of the conspiracy to cover up the flaws in the Manson prosecution is definitely your cup of tea."—Nerdist

"O'Neill's skillful accumulation of facts, untainted by bluffery, is a victory for honest discourse ... The discoveries that O'Neill has shared with the world-about lies, suppressions, and conflicts of interest-should scare the hell out of us."—Sean Howe, Bookforum

"Forget Tarantino's film, journalist O'Neill has been working on this book for 20 years and has found all kind of interesting things, including unreleased documents and new interviews that show legal misconduct... Conspiracy or not, this is what you call beach reading."—Style Weekly (Richmond)

"Whatever you think you know about the Manson murders is wrong. Just flat out wrong. Tom O'Neill's twenty years of meticulous research has unearthed revelations about the murders, the murderers, the prosecutors who tried them and a rogues gallery of cops, drug dealers, bent doctors, famous celebrities, grotesque government research, secret agents and shadowy figures in a conspiracy/cover up so sweeping and bizarre, you'll be as astounded as you are terrified. If your friends call you paranoid, maybe they're just ignorant."—Joe Ide, author of IQ and Wrecked

"Gripping masterful stuff. A dazzling and compellingly obsessed journalistic detective story that invites you down the rabbit-hole to a sex, drugs, and celebrity-serial-killer America. O'Neill's sunk decades into uncovering something far freakier than Helter Skelter ever admitted. Buckle up kids, this is true crime at its truest and most compelling."—Charles Graeber, Executive Producer of The Disappearance of Madeleine McCann and New York Times bestselling author of The Good Nurse

"Fans of conspiracy theories will find this a source of endless fascination."—Kirkus

"Top-notch investigative work ... An excellent work of investigative journalism proving the 'true story' is not always the truth."—Library Journal