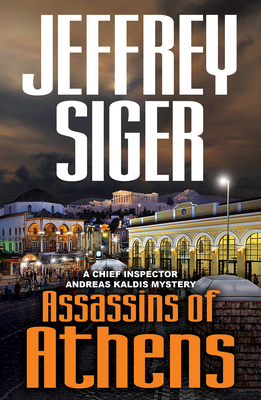 By Jeffrey Siger
Email or call for price
Special Order

This is book number 2 in the Chief Inspector Andreas Kaldis series.

When the body of a boy from one of Greece's most prominent families turns up in a dumpster in one of Athens' worst neighborhoods, Chief Inspector Andreas Kaldis of the Greek Police's Special Crimes Division is certain there's a message in the murder. But who sent it and why? Andreas' search for answers takes him deep into the sordid, criminal side of Athens nightlife and then to the glittering world of Athens society where age-old frictions between old and new money breed jealousy, murder, revenge, revolutionaries, and some very dangerous truths. It is a journey amid ruthless, powerful adversaries that brings Andreas face-to-face with old grudges, new emotions, ancient Athenian practices, and modern political realities once thought unimaginable.

“Jeffrey Siger‘s Assassins of Athens is a teasingly complex and suspenseful thriller set in a place where history—ancient or recent—can be a motive for murder. Siger and his protagonist, Chief Inspector Andreas Kaldis, are getting sharper and surer with each case.”  —Bestselling author Thomas Perry

“Siger creates a heady mix of Greek politics and culture, drawing on the ancient practice of banishment, the country’s student revolutionaries, and its notoriously corrupt officials....This is international police procedural writing at its best.”   —Booklist starred review

“Siger’s speedboat-paced second mystery…detonates with a sensational discovery…one that might stretch to the loftiest levels of Athenian society as well as way back into its bloodstained past…[a] suspenseful trip through the rarely seen darker strata of complex, contemporary Greece.”    —Publishers Weekly

“Siger is a superb writer....Best of all, he creates the atmosphere of modern Greece in vivid, believable detail, from the magnificence of its antiquities to the decadence of its power bearers and the squalor of its slums.”     —Pittsburgh Post-Gazette