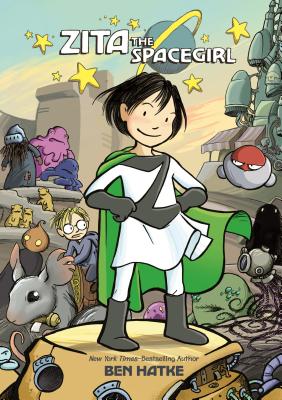 “For no reason at all, a little red button crashes to earth while Zita and her pal Joseph are out cavorting around. Of course, no one could resist pushing a mystery button, which pops open an interdimensional portal that whisks Joseph away. Zita follows and lands on a delightfully bizarre alien planet, where she sees Joseph being captured by a tentacled, scuba-headed creature. She makes some allies, takes off after him, and zany mishaps and dashing adventures ensue. Any story in which one can escape prison with a tube of "doorpaste" (just like toothpaste, except that it makes magic doors appear when smeared on a wall) obviously puts more stock in wowing imaginations than satisfying logic, and it needs solid cartooning chops to back it up. Fortunately, Hatke's got them, and he doles out an increasingly loony and charming array of aliens, robots, and unclassifiable blobs and hairy things for Zita (herself a cross between Ramona Quimby and a Matt Phelan waif) to encounter. It's fun, plenty funny, and more than a little random. Kids will love it.” —Booklist

“A headstrong young girl makes a hasty decision and finds herself in a galaxy far, far away in this graphic-novel shining star. Confident Zita finds a strange device in a meteor crater while playing with her more timorous best friend, Joseph. Impetuously, she accidentally activates the device, and before they can say "lift off," the duo ends up on an ill-fated planet, with Joseph about to be sacrificed by an alien doomsday cult and Zita determined to save him. Hatke's skill shines: His characters are richly imagined and portrayed, from the loyal, bumbling Strong-Strong (resembling a cross between a golem and an Uglydoll) to the menacing Screeds, an arachnid-like mechanized device that serves an evil purpose. The giant speechless Mouse, who communicates via ticker tape, is especially ingenious. Hatke takes a page from epic adventures like Jeff Smith's Bone and Kazu Kibuishi's Amulet and throws in a dash of intergalactic zest for a winning combination, sure to captivate young graphic-novel aficionados. Be prepared to blast off; this debut is truly out of this world.” —Kirkus, Starred Review

“While exploring a meteoroid crater, young explorers Zita and Joseph discover an unusual device featuring a conspicuous red button. Zita's curiosity compels her to press it, only to discover that it summons an alien creature that instantly abducts Joseph. The fearless heroine follows him to a planet inhabited by Scriptorians, who intend to use him as a ritual sacrifice to prevent the destruction of their planet. In her quest to save her friend, Zita assembles a cadre of unusual cohorts: a giant mouse that she rides; an oversize bloblike creature named Strong Strong; a Heavily Armored Mobile Battle Orb known as One; and Robot Randy. Together they head off to the Scriptorians' castle to rescue Joseph. Along the way, she meets Piper, a fellow earthling traveling through space who becomes an important player in the story. Aptly named, he is part Pied Piper and part inventor but always a smooth talker who alternately assists and sabotages the mission. In order to save her friend, Zita must ultimately risk her own chance to return to Earth. With echoes of The Wizard of Oz, this charming, well-told story has a timeless "read to me" quality that makes it perfect for one-on-one sharing. Adults will enjoy the subtle humor and inside jokes, and children will love intrepid Zita and her adventures. The art is simply delightful: a realistic heroine surrounded by a world of bizarre creatures. Fans of the Flight anthologies (Villard) will cheer for the return of Zita.” —School Library Journal