Pale Rider: The Spanish Flu of 1918 and How It Changed the World (Hardcover) 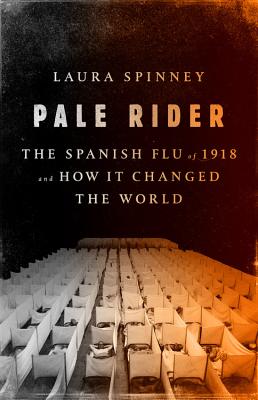 In 1918, the Italian-Americans of New York, the Yupik of Alaska and the Persians of Mashed had almost nothing in common except for a virus--one that triggered the worst pandemic of modern times and had a decisive effect on the history of the twentieth century.
The Spanish flu of 1918-1920 was one of the greatest human disasters of all time. It infected a third of the people on Earth--from the poorest immigrants of New York City to the king of Spain, Franz Kafka, Mahatma Gandhi and Woodrow Wilson. But despite a death toll of between 50 and 100 million people, it exists in our memory as an afterthought to World War I.
In this gripping narrative history, Laura Spinney traces the overlooked pandemic to reveal how the virus travelled across the globe, exposing mankind's vulnerability and putting our ingenuity to the test. As socially significant as both world wars, the Spanish flu dramatically disrupted--and often permanently altered--global politics, race relations and family structures, while spurring innovation in medicine, religion and the arts. It was partly responsible, Spinney argues, for pushing India to independence, South Africa to apartheid and Switzerland to the brink of civil war. It also created the true "lost generation." Drawing on the latest research in history, virology, epidemiology, psychology and economics, Pale Rider masterfully recounts the little-known catastrophe that forever changed humanity.

Laura Spinney is a science journalist and a literary novelist. She has published two novels in English, and her writing on science has appeared in National Geographic, Nature, the Economist, and the Telegraph, among others. Her oral history portrait of a European city, Rue Centrale, was published in 2013 in French and English.

"Impressive...Set against the devastating backdrop of global contagion, it is individual lives and deaths, discovered in letters, diaries, biographies and memoirs, that epitomize this rich account. Spinney invokes potent images...Along with exemplary research, Spinney's narrative is packed with fascinating, quirky detail...As the centenary of this monumental event approaches, other volumes on the pandemic will undoubtedly appear. Pale Rider sets the bar very high."—Nature

"A saga of tragedies and a detective story... Pale Rider is not just an excavation but a reimagining of the past. As the book progresses, the flu is cast increasingly as a character that crops up Zelig-like at important moments in history, altering the course of events previously unattributed to it.... Compelling."—The Guardian

"A book about the Spanish flu could so easily be dreary-complex pathology interwoven with pervasive tragedy. Not so Pale Rider. I've seldom had so much fun reading about people dying. Laura Spinney, a science journalist, is adept at explaining arcane scientific research in an entertaining, comprehensible way. ...With superb investigative skill and a delightfully light-hearted writing style, Spinney extends her analysis far beyond the relatively short duration of the plague....Spinney finds it odd that we know so little about the worst calamity to affect the human race. So do I. There are tens of thousands of books about the First World War, yet that flu is, arguable, more relevant to our world. While global war is, we hope, a thing of the past, global pestilence hovers like a vulture."—The Times

"Wide-sweeping... Spinney is a storyteller with a science writer's cabinet
of facts. Retracing influenza's death trail over nine continents, she
attempts to show how the flu affected not only the war-torn West but also
remote communities in South Africa, China, and Brazil. The book reveals how
desperately and differently people reacted and how gravely the flu influenced
the modern world, touching everything from medicine to business and from
politics to poetry."—Science

"Influenza, like all viruses, is a parasite. Laura Spinney traces its long shadow over human history... Ms Spinney ties the virulence of Spanish flu to its genetic irregularities and does a good job of explaining containment strategies through epidemiology... In Europe and North America the first world war killed more than Spanish flu; everywhere else the reverse is true. Yet most narratives focus on the West... Ms Spinney's book goes some way to redress the balance."—The Economist

"This riveting study plots the course of the deadliest pandemic in history."—The Sunday Times

"Ambitious...Spinney delves into the unfolding tragedy around the globe, looking at Brazil, China, Iran, India, and Russia. There is fascinating detail."—The Spectator

"An excruciating report on the global disaster...Absorbing...Spinney's important book does not attempt to offer light reading. No less than four pandemics are predicted in the 21st century. At least one will take the form of flu. Vaccination is not cheap, because the flu virus is constantly mutating. Annual vaccines currently offer the best protection. Britain does still possess a National Health Service. The enduring message of Spinney's magisterial work is to underline just how crucial that remarkable service is to the future security of an unusually privileged nation. Let's hope the author's book is read with care by Theresa May."—The Observer

"Spinney's book is intensely readable, and instead of
a strictly chronological account she circles around history, epidemiology and
culture to give a panoramic portrait of the previous century's most deadly
pandemic. We are probably due another one of these any day now, this is a great
way to see what the future holds."—TheAwl

"A masterful account of the possible origins, spread,
and cultural consequences of this modern-day plague."—Geographical

"A vividly recreated, grimly fascinating book...Coolly, crisply and with a consistently sharp eye for the telling anecdote...Spinney demonstrates how Spanish flu cast a long, dark shadow over the 20th century."—The Daily Mail

"[Spinney] evokes a world that seems both farther from
us than a mere century, and also uncomfortably close... If we can't reconstruct
our memories of the Spanish flu quickly enough, millions more will die in the
next pandemic."—The Tyee

"One of the many strengths of Pale Rider is to show its readers the regional variations that combat took throughout the world, from Bristol Bay to Zamora to Unalaska Island... For all the tragedies and upheavals, the book portrays, Pale Rider actually paints an oddly hopeful picture of a population more sensitized to early warnings and largely more willing to heed them."—TheNational

"An insightful and valuable account for all history
collections."—Library Journal

"Pale Rider contains vivid journalistic accounts of outbreaks around the world, from the U.S. to China, India, and Persia...Insightful."—Publisher's Weekly

"A compelling, expert account of a half-forgotten historical catastrophe."—Kirkus Reviews

"Spinney's detailed discussion includes the why and
how, the human devastation, and the effects on institutions and world affairs.
Now nearly 100 years removed from the 1918 Spanish flu, Spinney wonders what
lessons it has imparted that might help us prepare for and deal with the next,
inevitable influenza pandemic."—Booklist

"Spinney argues that almost a century later, the
Spanish flu is 'still emerging from the shadows of the First World War' in our
collective memories. She sets out to rectify this, knowing just which medical
mysteries and haunting vignettes will give the pandemic full purchase on our
imaginations."—New York Times Book Review

"A page turner that should easily satisfy armchair
historians and epidemiologists and anybody who likes a good, if gruesome,
yarn."—Foreign Policy

"Scarier than science fiction... You'll want to get your
flu shot after reading this book."—Zocalo, BestBooks of 2017

"A frightening new book... Those readers wishing to prevent tragedies like
the one in 1918 should read this book."—Lincoln Journal Star