Headed for a Hearse (Paperback) 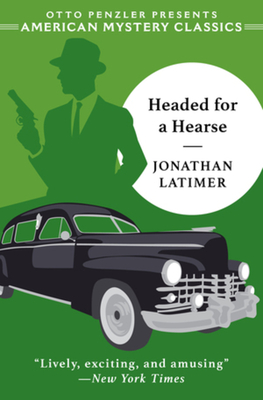 Just days from meeting the reaper, a convicted murderer hires Chicago’s most hard-boiled PI to save his neck—before the executioner can claim it.

Robert Westland’s date with the executioner is just around the corner when he finally decides to fight the murder rap sending him to the electric chair. Framed for his wife’s grisly demise, Westland is in a bind, and his last hope is Bill Crane, a booze-soaked detective who’s as ruthless with a quip as he is when trawling the streets for Chicago’s most brutal criminal element.

Crane’s got just six days to suss out the real killer—he sets his sights on a cast of oddball characters, aided by a lime squeezer, a quart of whiskey, a monkey wrench, a taxicab, a stopwatch, and a deep sea diver… but in 1930s Chicago, everyone’s got a secret, and the pressure is on for Crane to separate the dangerous from the truly homicidal before it’s too late. Chicago crime beat journalist-turned-novelist Jonathan Latimer blends hardboiled detective fiction with a shot of screwball comedy in the fast-moving, realistic 1935 baffler Headed for a Hearse, an exciting combination of the macabre and the humorous.

Includes discussion guide questions for use in book clubs.

Jonathan Latimer (1906–1983) was a bestselling author and screenwriter. Born in Chicago, he began his career as a crime reporter for the Herald Examiner, working there until 1935, when he set out on a twisting road to Hollywood, which included stints as a dude rancher, a stunt man, and a publicist. In the late 1930s he began writing screenplays for MGM, producing the scripts for several classic noir films, including The Big Clock (1948) and the adaptation of Dashiell Hammett’s The Glass Key (1942), which starred Alan Ladd. All the while, Latimer was writing fast-paced mystery novels such as The Lady in the Morgue (1936) and The Dead Don’t Care (1938). After fighting in World War II, he returned to Hollywood, where he continued writing novels and became a staff writer for the Perry Mason show.

MAX ALLAN COLLINS (b. 1948, Muscatine, Iowa) was named a Grand Master by the Mystery Writers of America in 2017. He is the author of the Shamus Award–winning Nathan Heller historical detective novels and the innovative Quarry series, recently adapted for TV by Cinemax. Road to Perdition, his graphic novel (with artist Richard Piers Rayner), became an Academy Award-winning film starring Tom Hanks. His other comics work includes the Dick Tracy comic strip (1977–1993), Batman, and his own Ms. Tree and Wild Dog (both co-created with artist Terry Beatty).