The Hidden Life of Ice: Dispatches from a Disappearing World (Hardcover) 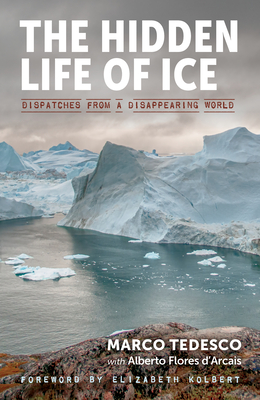 For most of us, the Arctic is a vast, alien landscape; for research scientist Marco Tedesco, it is his laboratory, his life’s work—and the most beautiful, most endangered place on Earth.

Marco Tedesco is a world-leading expert on Arctic ice decline and climate change. In The Hidden Life of Ice, he invites us to Greenland, where he and his fellow scientists are doggedly researching the dramatic changes afoot. Following the arc of his typical day in the field, he unearths the surprising secrets just beneath the icy surface—from evidence of long-extinct “polar camels” to the fantastically weird microorganisms that live in freezing cryoconite holes—as well as critical clues about the future of our planet.

Not just a student of its secrets, Tedesco is an acolyte of the Arctic’s beauty—its “magnificence and fragility,” as Elizabeth Kolbert writes in her foreword. Alongside the sobering facts on climate change, Tedesco shares stunning photographs of this surreal landscape— as well as captivating legends of Greenland’s earliest local populations, epic deeds of long-ago Arctic explorers, and his own moving reflections.

This is an urgent tribute to an awe-inspiring place that may be gone all too soon.

Marco Tedesco is a research professor at the Lamont-Doherty Earth Observatory at Columbia University. After receiving his Laurea degree and PhD from the University of Naples Federico II and the Italian National Research Council, he went on to join the NASA Goddard Space Flight Center as a postdoc and later, as a professor, became the founder and director of the Cryospheric Processes Laboratory. Tedesco has been featured in Science and frequently speaks as an expert on polar regions for The New York Times, The Washington Post, NPR, and others. He lives in New York.

Alberto Flores d’Arcais was born in Rome and graduated from the University of Rome with a degree in philosophy. He’s written for newspapers and magazines since the 1970s and has reported on hard-hitting issues like civil wars, drug trafficking, and the collapses of dictatorships internationally since the 1980s. In 2002, he was a John S. Knight Fellow for Journalism at Stanford University. He now divides his time between New York and Rome.
Elizabeth Kolbert has been a staff writer at The New Yorker since 1999. Her journalism has garnered multiple awards, including a 2006 National Academies Communication Award for her three-part series “The Climate of Man,” which investigated the consequences of disappearing ice on the planet. She is author of The Prophet of Love, Field Notes from a Catastrophe, and The Sixth Extinction, for which she won the Pulitzer Prize for general nonfiction in 2015. She received the Blake-Dodd Prize, from the American Academy of Arts and Letters, in 2017.

“The Hidden Life of Ice is a brilliant short book that grabs a lay reader through the elegance of its prose and its dispassionate investigation of a changing world.”—The Wall Street Journal

“Tedesco shares scientific and historical insight into Arctic ice, discussing the hardy microorganisms that live in it, the famed explorers behind major discoveries about the ice, and the threat posed by climate change.”—Publishers Weekly

“In the often poetic The Hidden Life of Ice, authors Marco Tedesco, a research professor at the Lamont-Doherty Earth Observatory at Columbia University, and Alberto Flores d’Arcais, an Italian journalist with a background in philosophy, offer fascinating insight into Greenland’s strangest features. Among the wonders discussed are evidence of long-extinct “polar camels” and the lives of microorganisms that can survive in freezing temperatures. Underscoring the book is concern for the Arctic’s imperiled future, and how climate change is altering this fantastical landscape forever.”—Literary Hub

“Imagine a science book that's truly informative but without an intimidating slew of equations, graphs, and references. That book is The Hidden Life of Ice—a book about ice, climate, Greenland, and the daily life of scientists who study these esoteric topics. It's a beautifully told story that will make you wish you could spend a year alone on the Greenland ice sheet."—Henry Pollack, ​Professor Emeritus at The University of Michigan Department of Earth and Environmental Sciences and author of A World Without Ice

“When it comes to ice and snow, and to understanding the cold and exotic climates of Greenland and Antarctica, Marco Tedesco is one of the most knowledgeable scientists alive. The Hidden Life of Ice is a terrific complement to his important academic work—a book that is insightful, lyrical, and personal, and that will help guide readers through the science of a warming world.” —Jon Gertner, author of The Ice at the End of the World and The Idea Factory

“In this illuminating narrative, history, science and the deeply personal experiences of living on ice are woven together in a way that offers the reader a unique perspective on the past, present, and future of the Greenland ice sheet. The colors and sounds of migrating ice, the challenges of tent life in one of the planet’s harshest settings, the importance of companionship, and the wild world’s power to inspire deep reflection and contemplation all make this book a must-read for anyone who is curious about the frozen Arctic landscape or concerned about the impacts of climate change.”—William E. Glassley, author of A Wilder Time: Notes from a Geologist at the Edge of the Greenland Ice

“Marco Tedesco tells us a story we need to hear.  Most of us will never see Greenland with our own eyes, but we can see it, in all its splendor, through his. Tedesco teaches us that we are not just caretakers of our home planet, although we need to be that and do that, but also that we are intimately connected to the snow and ice of Greenland. As it melts, all of us, everywhere, are changed.”—Susan Hand Shetterly, author of Seaweed Chronicles

"Greenland is ground zero for the monumental change sweeping over our world during the Anthropocene. Dr. Tedesco makes a valuable and much-needed contribution toward the dire story unfolding in this great and sometimes enigmatic land."—James Balog, A.D. White Professor at Cornell University and founder of the Extreme Ice Survey and Earth Vision Institute