In Search of Common Ground: Inspiring True Stories of Overcoming Hate in a Divided World (Hardcover) 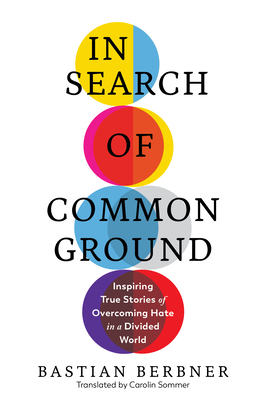 An essential book for this moment—here are inspiring stories of people who have built meaningful relationships despite initial deep-seated prejudice, revealing how we can mend our fiercest divides

Is there nothing we can do? This is the question that inspired award-winning journalist Bastian Berbner to embark on this book as he surveyed the political arenas in the United States, the United Kingdom, and elsewhere across Europe, compelled by what he describes as “something akin to political fear.” What he found in the course of his reporting are people who, despite significant differences in their worldviews and ideas, were able to trust, listen to, and be open with one another.

In Search of Common Ground takes us around the world: to Arizona, where a former neo-Nazi befriends his Black parole officer; to Germany, where an older couple dread the arrival of their new Roma neighbors—but are moved upon meeting them to offer help, becoming their friends and champions; to Ireland, where we see one friendship change the world when a gay-rights activist overturns a conservative mailman’s homophobia—and together, they help sway public opinion to legalize gay marriage.

Berbner’s intensively reported and compelling accounts are interwoven with expert insight from Nobel Prize-winning economist Daniel Kahneman, psychologist Peter Coleman of Columbia University, and others. This uplifting book vividly shows that we can overcome prejudice and find common ground.

Bastian Berbner has reported portions of this book on This American Life; other outlets that have already featured this book include David Byrne’s newsletter “Reasons to Be Cheerful” and The Guardian. A reporter for the German newspaper Die Zeit, Berbner hosts the podcast 180 Grad (“180 Degrees”), where he first developed many of the stories in this book. He has been honored with some of the most prestigious journalism awards in Germany, where he lives.

“In Search of Common Ground: Inspiring True Stories of Overcoming Hate in a Divided World by Bastian Berbner profiles unlikely friendships formed across stark divides, including a neo-Nazi and his Black parole officer and a German couple and their Roma neighbors.”—Publishers Weekly

“We put one of the stories from this book onto our show because Bastian’s mission is so refreshing and original, and he’s such a thoughtful, empathetic storyteller. At this moment, when it feels like the whole world is retreating deeper and deeper into competing camps who don’t listen to each other, it’s exciting to read about anyplace doing the opposite—and thrilling to have a whole book of them.”—Ira Glass, host of This American Life

“I was immediately drawn to the way Berbner relies on storytelling to bridge divides. It is heartening to read a book that understands we need to build trust to find real solutions to the issues we are facing around the world. One of the most critical elements of radical empathy is taking action to create change—and this book provides a path for doing just that.”—Terri Givens, author of Radical Empathy