Empire of Deception: The Incredible Story of a Master Swindler Who Seduced a City and Captivated the Nation (Paperback) 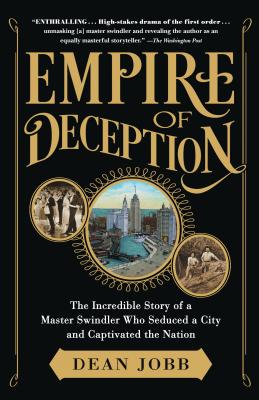 “It was P.T. Barnum who said that 'there's a sucker born every minute,' and there was never a better time to take advantage of that fact than during the Roaring 20s. This is the true story of the devious exploits of Leo Koretz, who forsook his Chicago law career to convince unsuspecting people to invest in a Panamanian oil field that he had concocted out of thin air, as well as an astute assessment of human nature. A fascinating tale of greed and gullibility.”
— Alden Graves (E), Northshire Bookstore, Manchester Center, VT

It was a time of unregulated madness. And nowhere was it madder than in Chicago at the dawn of the Roaring Twenties. Enter a slick, smooth-talking, charismatic lawyer named Leo Koretz, who enticed hundreds of people to invest as much as $30 million—upward of $400 million today—in phantom timberland and nonexistent oil wells in Panama. This rip-roaring tale of greed, financial corruption, dirty politics, over-the-top and under-the-radar deceit, illicit sex, and a brilliant and wildly charming con man on the town, then on the lam, is not only a rich and detailed account of a man and an era; it’s a fascinating look at the methods of swindlers throughout history.

As Model Ts rumbled down Michigan Avenue, gang-war shootings announced Al Capone’s rise to underworld domination. As bedecked partygoers thronged to the Drake Hotel’s opulent banquet rooms, corrupt politicians held court in thriving speakeasies and the frenzy of stock market gambling was rampant. Leo Koretz was the Bernie Madoff of his day, and Dean Jobb shows us that the American dream of easy wealth is a timeless commodity.

“Intoxicating and impressively researched, Jobb’s immorality tale provides a sobering post-Madoff reminder that those who think everything is theirs for the taking are destined to be taken.” —The New York Times Book Review

“Captivating . . . A story that seems to be as American as it can get, and it’s told well.” —The Christian Science Monitor

“A masterpiece of narrative set-up and vivid language . . .  Jobb vividly . . . brings the Chicago of the 1880s and ‘90s to life.” —Chicago Tribune
“This cautionary tale of 1920s greed and excess reads like it could happen today.” —The Associated Press

Dean Jobb is an award-winning author and journalist and a professor at the University of King’s College in Halifax, Nova Scotia, where he teaches in the Master of Fine Arts in Creative Nonfiction program. He is the author of eight previous books, including Empire of Deception, which the New York Times Book Review called “intoxicating and impressively researched” and the Chicago Writers Association named the Nonfiction Book of the Year. Jobb has written for major newspapers and magazines, including the Chicago Tribune, Toronto’s Globe and Mail, and the Irish Times. He writes a monthly true-crime column, “Stranger Than Fiction,” for Ellery Queen’s Mystery Magazine. His work as an investigative reporter has been nominated for Canada’s National Newspaper and National Magazine awards, and Jobb is a three-time winner of Atlantic Canada’s top journalism award.

“Intoxicating and impressively researched, Jobb’s immorality tale provides a sobering post-Madoff reminder that those who think everything is theirs for the taking are destined to be taken.” —The New York Times Book Review

“Comprehensively researched and enthralling . . . High-stakes hijinks give the story a rollicking feel, but Jobb manages great poignancy, too. . . This lively and sweeping account seems to have already given a master con artist his due, putting him in the ‘pantheon of pyramid-building swindlers.’” —The Washington Post

“This cautionary tale of 1920s greed and excess reads like it could happen today.” —The Associated Press

“Jobb vividly, albeit briefly, brings the Chicago of the 1880s and ‘90s to life . . . [and] is a masterpiece of narrative set-up and vivid language.” —Chicago Tribune

“Dean Jobb skillfully dusts off this century-old tale with a fast-paced narrative, a keen eye for detail and a cast of characters in which the free-for-all city of Chicago plays a prominent role . . . [A] masterfully told story.” —Minneapolis Star Tribune

“Jobb makes it clear that Koretz’s schemes weren’t unique to his time period. The parallels between Koretz and Madoff are fascinating: Both men 'dropped hints' and 'played hard to get,' only selling shares to those who persistently begged for them. And both confined their sales, at least at first, to an inner circle of those who knew and trusted them, making their betrayals all the more brutal.” —The Columbus Dispatch “Peppered with contemporaneous photos depicting the key players and the swanky places, phony stock certificates, newspaper headlines, and even a 'wanted' posted, Empire of Deception is a jaw-dropping, rollicking good read.”—Booklist “This lively, entertaining, and depressingly relevant history of a man and his con reads like a novel and will be enjoyed by fans of popular history as well as true crime.” —Library Journal, starred review

“Dean Jobb has written an absolutely rollicking tale that is one part The Sting, one part The Great Gatsby, and one part The Devil in the White City. Impressively researched and brilliantly told, Empire of Deception vividly recreates the unscrupulous side of 1920s Chicago where greed, deception, and corruption ran amok, and where one Leo Koretz, a charismatic and enigmatic con man, charmed them all . . . including me.” —Karen Abbott, author of Liar, Temptress, Soldier, Spy