Call the Midwife: Farewell to the East End (CD-Audio) 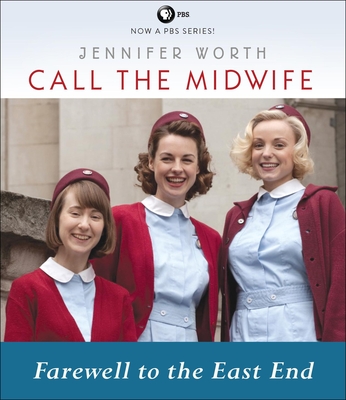 By Jennifer Worth, Nicola Barber (Read by)
$39.95
Temporarily Out Of Stock - Can Be Ordered For You, Takes Extra Time.

Leaving a middle-class childhood to become a midwife in London’s poor East End, Jennifer Worth not only delivered babies, she touched numerous lives and recounted with depth the heartrending story of a neighborhood in transition. Call the Midwife: Farewell to the East End is the last book in Worth’s memoir trilogy, which the Times Literary Supplement described as “powerful stories with sweet charm and controlled outrage” in the face of dire circumstances.

Here, at last, is the full story of Chummy’s delightful courtship and wedding. We also meet Megan’mave, identical twins who share a browbeaten husband, and return to Sister Monica Joan, who is in top eccentric form. As in Worth’s first two books, Call the Midwife: A Memoir of Birth, Joy, and Hard Times and Call the Midwife: Shadows of the Workhouse, the vividly portrayed denizens of a postwar East End contend with the trials of extreme poverty—unsanitary conditions, hunger, and disease—and find surprising ways to thrive in their tightly knit community.

JENNIFER WORTH (1935-2011) trained as a nurse at the Royal Berkshire Hospital in Reading, England. She then moved to London to train as a midwife. She later became a staff nurse at the Royal London Hospital, Whitechapel, and then ward sister at the Elizabeth Garrett Anderson Hospital in Euston. Music had always been her passion and in 1973 Jennifer left nursing in order to study music intensively. She gained the Licentiate of the London College of Music in 1974 and was awarded a fellowship ten years later.

NICOLA BARBER has appeared on stage in New York and across the country, including with Scarlett Johnansson in <i>The Nanny Diaries.</i> She holds a degree in theatre arts from UNC-Chapel Hill, and has taken classes at the London Academy of Dramatic Art. She has been training and performing voiceovers since 2001, and can be heard in video games, animation, commercials, and corporate videos, as well as on award-winning audiobooks.