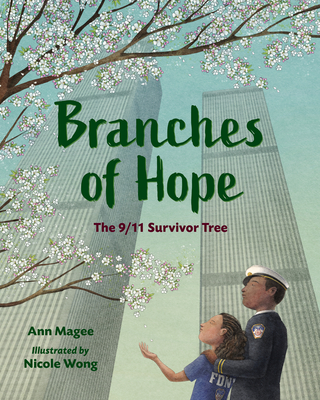 “This true-life fable about a tree that survived 9/11 commemorates the attack while evoking a resilient spirit and the healing power of nature."
—Carole Boston Weatherford, author of Newbery Honor book BOX

“Branches of Hope is a tribute to resilience and hope, a gentle way to talk with our youngest readers about the memory of 9/11.”
—Kate Messner, author of The Brilliant Deep: Rebuilding the World's Coral Reefs

The branches of the 9/11 Survivor Tree poked through the rubble at Ground Zero. They were glimpses of hope in the weeks after September 11, 2001.

Remember and honor the events of 9/11 and celebrate how hope appears in the midst of hardship. The Survivor Tree found at Ground Zero was rescued, rehabilitated, and then replanted at the 9/11 Memorial site in 2011. This is its story.

In this moving tribute to a city and its people, a wordless story of a young child accompanies the tree's history. As the tree heals, the girl grows into an adult, and by the 20th anniversary of 9/11, she has become a firefighter like her first-responder uncle. A life-affirming introduction to how 9/11 affected the United States and how we recovered together.

Debut author Ann Magee has been a Jersey girl all her life. A former elementary-school teacher, she loves teaching reading and writing. She lives with her husband and three children--her favorite people--in New Jersey.

Nicole Wong has illustrated many books for children, including Flying Deep; To the Stars!; No Monkeys, No Chocolate; Maxwell's Mountain; and Wild Rose's Weaving. www.nicole-wong.com

♦ Text and pictures attest to the resilience of New Yorkers and a remarkable tree following 9/11.
A pear tree is discovered—scarred, burned, and buried—under mounds of rubble after the collapse of the Twin Towers and replanted in a nursery in the Bronx, where it eventually regrows and thrives. This deeply touching book equates the tree’s extraordinary renaissance with New Yorkers’ reawakened strength, spirit, and hope in the aftermath of the tragedy. One particular family—portrayed as an interracial couple (mom presents Black and dad, White) and their very young child—stand in for all New York’s and, indeed, America’s citizens and are depicted in opening scenes innocently enjoying daily life. Everything changes after they watch in bewildered horror as the awful events unfold on TV. Illustrations very ably accompany the simple, solemn text, using both double-page spreads and paneled insets; they highlight and interconnect the passing of time for tree and humans. The “Survivor Tree” is reborn, ultimately returned to its original site and replanted; first responders at ground zero work diligently; the child grows and gains a baby sibling; ordinary activities continue; seasons change; and a 9/11 memorial is built. At book’s end, the child has grown to adulthood and become a New York City firefighter. Several somber-colored illustrations capture the disaster, but the artwork doesn’t dwell on devastation, instead focusing on bright, uplifting images of hope and recovery. An author’s note and information about the tree conclude the book.
Moving and poignant, a tender tribute in this 20th-anniversary commemoration of 9/11.
—Kirkus Reviews, starred review

“Season after season, the tree grew./ Each spring arrived with warm whispers and healing rain.” Commemorating 9/11 two decades after its occurrence, debut author Magee’s free verse narrative focuses on a city’s endurance as symbolized by New York City’s Survivor Tree, a Callery pear in the World Trade Center Plaza that survived the buildings’ collapse. Alongside the visual story of the attacks and their aftermath, Wong’s detailed digital illustrations present the wordless tale of a child, a toddler during the attacks, growing up and becoming a first responder. In a scrapbook-style layout, snapshots of the brown-skinned, biracial child’s family life appear alongside full-bleed illustrations of the tree’s recovery, new growth, and replanting at ground zero a decade later. The combination of picture and verse effectively delivers the message that comfort can be found in remembrance and the continuity of life. Back matter includes contextualizing information about the Survivor Tree, an author’s note, and a selected bibliography.
—Publishers Weekly

A young girl, who is biracial, and her family experience the tragedy of the terrorist attacks of 9/11 in New York City, with the special lens of having a family member who is in the New York City Fire Department. Through juxtaposed wordless illustrated scenes and illustrations with text, readers experience the tragedy of the day, the aftermath, and the healing of the city and those who bravely came to the rescue. Also featured is a tree, a Callery pear tree that survived the destruction of the World Trade Center. The tree was excavated from the rubble and years later replanted near the South Pool at the 9/11 Memorial and Museum. Digital illustrations do not shy away from the destruction and tragedy of 9/11 but the focus on the helpers and the passage of time allow for hope to form the central essence of the book. Connections to the Survivor Tree in Oklahoma City (as detailed in Chris Barton’s All of a Sudden and Forever) speak to the resilience of nature and humankind in the face of tragedy. Back matter includes information regarding the Survivor Tree Seedling Program. VERDICT Highly recommended for a generation of elementary students looking for a hopeful entry point to a hard moment in American history.
—School Library Journal

This memoir-like story, told in spare, careful sentences that recall helping actions around 9/11, portrays the day and subsequent years by following the growth of a little girl and of a tree that survived the attack. The 9/11 Survivor Tree was found at Ground Zero and moved to a nursery, a move that, like some other events in the book, is shown only in the art, thoughtfully leaving adults to fill in children’s questions with the level of detail a child can handle. Seasons change, the years pass, and the tree eventually returns as part of the 9/11 memorial. Paralleling that story is that of the little girl, part of an FDNY family, who lives near the World Trade Center with her Black mom and white dad. Gentle text and bright, detailed images with lots of trees and plants show the best parts of life after tragedy. An afterword gives more advanced details on 9/11 and on the 9/11 Survivor Tree Seedling Program, which shares hope with cities that have experienced tragedy. A great addition to public and school library shelves.
—Booklist

A pear tree that survived the 9/11 terrorist attacks in New York City has become a symbol of hope in adversity. Magee's respectful, lyrical text follows the tree's story through the seasons from its discovery as "something green among the ashes," to its regrowth off-site, to its replanting at Ground Zero ten years later. Wong's softly textured illustrations incorporate a wordless fictional story, told via inset panels, featuring a mixed-race girl and her family (including an FDNY firefighting relative); their lives parallel the tree's resilience. Both text and art present events soberly but with a young audience in mind; the girl's reassuring story helps temper more scary aspects. "More About the Survivor Tree's Journey," an author's note, and selected bibliography are appended.
—The Horn Book