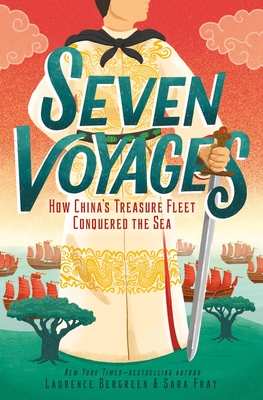 From New York Times bestselling author Laurence Bergreen and author Sara Fray comes this immaculately researched history for young readers detailing the life of Zheng He, his complex and enduring friendship with his emperor, and the epic Seven Voyages he led that would establish China as a global power.

At nearly seven feet tall, Admiral Zheng He looked out at the sea before him.

For the next three decades, the oceans would be his home, as he would command over 1,500 ships and thousands of sailors in seven journeys that would predate the heart of the European Age of Exploration. Over his seven epic journeys, Zheng He explored the Northern Pacific and Indian Oceans, traveling as far as the east coast of Africa, expanding Chinese power globally, warring with pirates, and capturing enemies along the way in the name of his emperor, Zhu Di. But this giant figure was not always at the helm of a ship.

Laurence Bergreen is an award-winning biographer whose previous titles include Columbus: The Four Voyages, Voyage to Mars: NASA's Search for Life Beyond Earth, Louis Armstrong: An Extravagant Life, Capone: The Man and the Era, As Thousands Cheer: The Life of Irving Berlin, and James Agee: A Life, each considered the definitive work on its subject. His work has been translated into twenty-five languages worldwide. He has written for many national publications, including the New York Times and the Wall Street Journal, and has taught at the New School for Social Research. A graduate of Harvard University, he lives in New York City.

Sara Fray was born and raised in New York City. She is a graduate of Columbia University where she studied East Asian Civilization and American History. She was an A&R executive and recording studio owner before she became a freelance editor, historical researcher and writer. Her young adult adaptation of Laurence Bergreen’s Magellan: Over The Edge Of The World was a selection of the Junior Library Guild in the fall of 2017 and Amazon’s #1 new release in Teen and Young Adult History of Exploration and Discovery. She and her husband currently reside in New Jersey with their young daughter.

* "The research for this book must have been as formidable as the voyages, with the authors covering everything from Chinese daily life in the 1400s to shipbuilding and regional politics. It’s never overwhelming, though, since as well as being fascinating on their own, these facts contextualize the swashbuckling drama."—Booklist, starred review