The Dark Queens: The Bloody Rivalry That Forged the Medieval World (Hardcover) 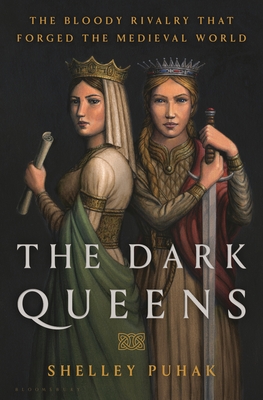 “A well-researched and well-told epic history. The Dark Queens brings these courageous, flawed, and ruthless rulers and their distant times back to life.”--Margot Lee Shetterly, New York Times-bestselling author of Hidden Figures

The remarkable, little-known story of two trailblazing women in the Early Middle Ages who wielded immense power, only to be vilified for daring to rule.

Brunhild was a foreign princess, raised to be married off for the sake of alliance-building. Her sister-in-law Fredegund started out as a lowly palace slave. And yet-in sixth-century Merovingian France, where women were excluded from noble succession and royal politics was a blood sport-these two iron-willed strategists reigned over vast realms, changing the face of Europe.

The two queens commanded armies and negotiated with kings and popes. They formed coalitions and broke them, mothered children and lost them. They fought a decades-long civil war-against each other. With ingenuity and skill, they battled to stay alive in the game of statecraft, and in the process laid the foundations of what would one day be Charlemagne's empire. Yet after the queens' deaths-one gentle, the other horrific-their stories were rewritten, their names consigned to slander and legend.

In The Dark Queens, award-winning writer Shelley Puhak sets the record straight. She resurrects two very real women in all their complexity, painting a richly detailed portrait of an unfamiliar time and striking at the roots of some of our culture's stubbornest myths about female power. The Dark Queens offers proof that the relationships between women can transform the world.

Shelley Puhak is a critically acclaimed poet and writer whose work has appeared in the Atlantic, Smithsonian, Time, Lapham’s Quarterly, Virginia Quarterly Review, and other publications. She is the author of three books of poetry, including the Anthony Hecht Prize-winning Guinevere in Baltimore and Harbinger, a National Poetry Series selection. The Dark Queens is her nonfiction debut. She lives in Maryland.

“Medieval history at its most fun. Game of Thrones, eat your heart out!” - Napa Valley Register

“Sure, the Plantagenets fought each other for a couple of generations, and the Tudors had wives and dynastic rivals beheaded. But if you think their reigns were bloody, just wait until you meet the Merovingians, the riveting royal family in Shelley Puhak’s The Dark Queens … [Puhak] demonstrates that Brunhild’s and Fredegund’s names deserve to be in the historical annals as much as any king’s.” - Bookpage

“Pushes aside the myth and theological agenda surrounding early medieval chronicles to create realistic and compelling stories of Merovingian queens Fredegund and Brunhild … The Dark Queens is an intriguing look at a little-known period in history.” - Bookreporter

“A lyrical and astute assessment of the political maneuvers, battlefield strategies, and resilience of medieval queens and rivals Fredegund and Brunhild … Puhak skillfully draws on contemporaneous sources, including letters, poems, and a vividly told yet obviously biased account by Brunhild’s devoted ally, Bishop Gregory of Tours, to create her thrilling history. The resulting is a deeply fascinating portrait of the early Middle Ages that vigorously reclaims two powerhouse women from obscurity.” - Publishers Weekly (starred review)

“Puhak packs the intrigue and drama of early Medieval Europe in tightly, and there's a gasp-worthy ending that'll leave you breathless.” - Bookworm Sez

“In The Dark Queens, Queen Brunhild and Queen Fredegund are restored to center stage … Puhak presents a vivid picture of how they skillfully preserved their lives, their power and their families … She also imagines what it might mean if girls found them featured more prominently in their textbooks. History readers will be enthralled.” - Shelf Awareness

“A compelling read for those with an interest in early medieval European history, Merovingian history, and women in power.” - Library Journal

“Puhak relays an astounding history where these women guided the destinies of their nations … The complicated and intertwined history of Brunhild and Fredegund is a fascinating read for lovers of early Medieval history.” - Free-Lance Star

“A well-researched and well-told epic history. The Dark Queens brings these courageous, flawed, and ruthless rulers and their distant times back to life.” - Margot Lee Shetterly, New York Times-bestselling author of HIDDEN FIGURES

“History owes more to Brunhild and Fredegund, two queens whose bitter rivalry left a trail of bodies in their wake, than the lies perpetuated by their enemies. So bravo to Shelley Puhak for a remarkable piece of detective work, by turns enlightening and shocking. Anyone who thought that medieval queens spent their time sewing and sighing is in for a surprise.” - Amanda Foreman, New York Times-bestselling author of GEORGIANA: DUCHESS OF DEVONSHIRE and THE WORLD MADE BY WOMEN

“Bright, smart, and playful, The Dark Queens is a marvelous trip into the murky early Middle Ages. Shelley Puhak presents a believable and vividly drawn portrait of the Frankish world, and in doing so restores two half-forgotten and much-mythologized queens, Brunhild and Fredegund, to their proper place in medieval history.” - Dan Jones, New York Times-bestselling author of THE TEMPLARS and POWERS AND THRONES

“On the one hand, a story of scheming and savagery to make Game of Thrones look tame—on the other, a genuinely important exploration of the relationship between two powerful women, written with zest and verve.” - Sarah Gristwood, internationally bestselling author of ARBELLA and THE TUDORS IN LOVE

“This is the story—told with a sharp eye, at heart-pounding pace—of two extraordinary women who held power in a brutal world that believed their sex couldn’t rule. Many scholars ‘still don’t know what to do’ with Brunhild and Fredegund. Shelley Puhak does.” - Helen Castor, author of SHE-WOLVES and JOAN OF ARC

“These dark queens were undaunted survivors who still whisper powerful advice … Shelley Puhak has recovered forgotten biographies we must no longer neglect.” - Kara Cooney, PhD, author of WHEN WOMEN RULED THE WORLD

“A blood-soaked journey through sixth-century Europe, casting new light on the so-called Dark Ages … Surprising and thoroughly riveting.” - Emily Midorikawa, author of OUT OF THE SHADOWS

“This gripping saga features everything from gory murders to scandalous nuns. Brunhild and Fredegund are often flattened into early medieval Europe’s great villains, but in Shelley Puhak’s brilliant telling, they come to rich and nuanced life.” - Emma Southon, PhD, author of AGRIPPINA

“Stirring and passionate … A brilliant reconstruction of our long-suppressed past, with all its murder and intrigue, loyalty and courage, The Dark Queens is unforgettable.” - Nancy Marie Brown, author of THE REAL VALKYRIE

“An eye-opening medieval delight! Shelley Puhak rescues two fascinating, real-life women from the misogynistic dustbin of history, and sheds light on the origins of such strong fictional grandes dames as Lady Macbeth, Cersei, and every Wagnerian heroine who ever sported a Viking helmet. Impeccably researched. A delicious read.” - Denise Kiernan, New York Times bestselling author of THE GIRLS OF ATOMIC CITY and WE GATHER TOGETHER