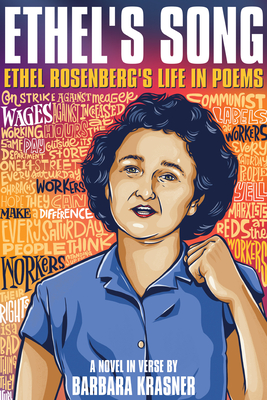 Convicted of conspiracy to commit espionage for the Soviet Union against the United States, Ethel Rosenberg shares the story of her beliefs, loves, secrets, betrayals, and injustices in this compelling YA novel in verse.

In 1953, Ethel Rosenberg, a devoted wife and loving mother, faces the electric chair. People say she’s a spy, a Communist, a red. How did she get here? In a series of heart-wrenching poems, Ethel tells her story. The child of Jewish immigrants, Ethel Greenglass grows up on New York City’s Lower East Side. She dreams of being an actress and a singer but finds romance and excitement in the arms of the charming Julius Rosenberg. Both are ardent supporters of rights for workers, but are they spies? Who is passing atomic secrets to the Soviets? Why does everyone seem out to get them?

This first book for young readers about Ethel Rosenberg is a fascinating portrait of a commonly misunderstood figure from American history, and vividly relates a story that continues to have relevance today.

Barbara Krasner is the author of many books across genres, including fiction, poetry, creative nonfiction, and children’s literature. Her recent titles include 37 Days at Sea: Aboard the M.S. St. Louis, 1939, Civilian Casualties in War and Ethel’s Song: Ethel Rosenberg’s Life in Poems. Her book Goldie Takes a Stand! Golda Meir’s First Crusade was a recipient of the Sydney Taylor Honor Award. She holds a Ph.D. in Holocaust & Genocide Studies from Gratz College, teaches in the Holocaust & Genocide Studies Program at The College of New Jersey, and serves as director of the Mercer County Holocaust, Genocide, and Human Rights Education Center. She also holds an MFA in Writing for Children & Young Adults from the Vermont College of Fine Arts.

★"Told in verse, this is a story of persistence and resilience. Rosenberg stood up for what she believed in, called out injustices, and was committed to the fight to end poverty and bring rights to the worker. Excellently written and expertly researched, Krasner’s work tells an important story not to be forgotten by time. A painful tale of familial betrayal, and yet another failure of the U.S. justice system… [J]aw-dropping true story for any YA reader interested in U.S. political history." —School Library Journal, starred review

"In beau­ti­ful, flow­ing, heart-wrench­ing verse, Bar­bara Kras­ner tells the sto­ry of Ethel Rosen­berg... (b)uild­ing on exten­sive research, the author paints a pic­ture so evoca­tive that the read­er feels immersed in the moment and thus afraid...(a) tri­umphant com­bi­na­tion of poet­ry and his­to­ry, this book can be used by teach­ers, par­ents, and group lead­ers for dis­cus­sion and analysis." —Michal Hoschan­der Malen, Jew­ish Book Coun­cil

"Ethel Greenglass’ story has often been told with her husband, Julius Rosenberg, at the forefront; now it’s her turn....Even if readers are already aware of how the story ends, this work, which utilizes a variety of forms of poetry and is enhanced with historic photos, will read like a thriller complete with passion, politics, and family betrayal.The subject’s voice, strength, intelligence, and heart ring out on every page." —Kirkus Reviews

"Krasner’s daring historical novel is a collection of fictionalized first-person poems that...build tension through Rosenberg’s consistently proud, defiant voice, and her confidence that she and Julius did nothing wrong... Family photos, interspersed throughout, lend poignancy; an epilogue and timeline provide context and additional historical background." —Publishers Weekly

“Krasner combines research and interviews with the Rosenbergs’ sons to arrive at a sensitive and sympathetic portrait of Ethel…This is a strong recommendation for teens drawn to the biographical poetry of Marilyn Nelson.” —The Bulletin of the Center for Children’s Books

“Ethel Rosenburg, convicted of spying for the Soviets and executed during the Cold War, remains a controversial historical figure and is likely unknown to young readers. Free-verse poems in varying formats introduce the woman behind the headline-making trial.  Krasner paints Ethel as a sympathetic character from a difficult home who was devoted to her husband and turned to the Communist Party to fight unfair labor practices; the author contends Ethel’s innocence in an epilogue… this well-researched novel in verse is an intriguing biography.”—Booklist

"In Ethel's Song, Barbara Krasner courageously tells the little known story of Ethel Rosenberg in verse.  This moving and powerful novel, based on interviews and extensive research, should be read aloud to inspire critical thinking about social justice during a dark period in American history." – Susan Goldman Rubin, author of Sing and Shout! The Mighty Voice of Paul Robeson

"Incorporating the suspense of a thriller, the passion, rhythm and syntax of the finest poetry, the complexity of world politics, and the immediacy of current events, Barbara Krasner’s biography of Ethel Rosenberg is a master class in writing the verse novel.  By turns heartbreaking and hopeful, Krasner restores the woman behind the hype, highlighting her childhood, her dreams, her love for humanity—and as importantly, for her husband and children. Using villanelles, pantoums, couplets, and all forms at her disposal, Krasner truly honors the Rosenberg legacy." – Rich Michelson, National Jewish Book Award winner