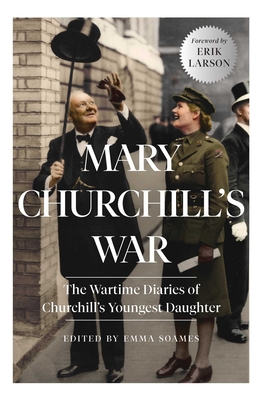 “I am not a great or important personage, but this will be the diary of an ordinary person's life in war time. Though I may never live to read it again, perhaps it may not prove altogether uninteresting as a record of my life.”

In 1939, seventeen-year-old Mary found herself in an extraordinary position at an extraordinary time: it was the outbreak of World War II and her father, Winston Churchill, had been appointed First Lord of the Admiralty; within months he would become prime minister.

The young Mary Churchill was uniquely placed to observe this remarkable historical moment, and her diaries—most of which have never been published until now—provide an immediate view of the great events of the war, as well as exchanges and intimate moments with her father. But these diaries also capture what it was like to be a young woman during wartime.

An impulsive and spirited writer, full of coming-of-age self-consciousness and joie de vivre, Mary's diaries are untrammeled by self-censorship or nostalgia. From aid raid sirens at 10 Downing Street to seeing action with the women’s branch of the British Army, from cocktail parties with presidents and royals to accompanying her father on key diplomatic trips, Mary's wartime diaries are full of color, rich in historical insight, and a charming and intimate portrait of life alongside Winston Churchill during a key moment of the twentieth century.

Emma Soames (editor) is a broadcaster and columnist who has been editor of The Literary Review, Tatler, and the Daily Telegraph magazine. She is the second child of Mary and Christopher Soames and is her mother's Literary Executor and she is a granddaughter of Winston and Clementine Churchill.

Erik Larson (introduction) is the author of six national bestsellers: The Splendid and the Vile, Dead Wake, In the Garden of Beasts, Thunderstruck, The Devil in the White City, and Isaac’s Storm, which have collectively sold more than ten million copies. His books have been published in nearly twenty countries.

Mary Churchill was the youngest daughter of Sir Winston and Baroness Clementine Spencer-Churchill. During the war, Mary served in the women's branch of the British Army and as an officer commanding mixed anti-aircraft batteries, for which she was awarded the MBE. After World War II, Mary continued to assist her father and was at Churchill's side during many of the key moments of his premiership. Mary was the author of several books, including a biography of her mother, and was Chair of the National Theatre Board and patron of Churchill organizations and charities worldwide. She died on 31 May 2014.

"Mary’s diaries are a remarkably generous gift to posterity. Even though she was only sixteen when she began the diaries, she knew she had a front row seat to some of the most important events in history. This is not a book to devour, but one to relish. The language is fresh and lively, and some of her nuggets of wisdom may be useful even today: 'It strengthens in my mind that one should expect & hope & pray for very little—except courage.'"
— Historical Novel Society

"[Mary Churchill's War] is both a historic record of wartime Britain and an unabashed love letter to her father. The voice that comes through is uncensored, ebullient, and guileless...Emma Soames, one of Mary’s five children, has done an excellent job of editing the diaries. She is correct when she says reading them is like 'eavesdropping on history.'"