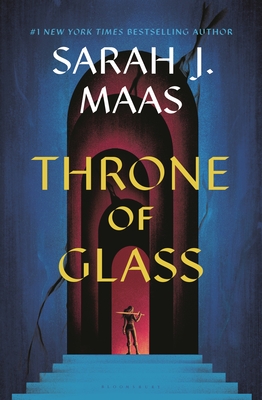 This is book number 1 in the Throne of Glass series.

But better. So much better. This book is *insert every possible positive adjective here* (and book two is even better!)

What is great about the protagonist (among many things) is that she
is a morally ambiguous character. She is not the innocent, wide-eyed
female protagonist that many book series follow behind. Caelena is, to
put it as clearly as the book does, an assassin. That is what she does,
and that is what makes her such an interesting character to follow. Maas
is a wonderful storyteller that has left me begging for the next book. I
cannot get enough of her books.

Enter the world of Throne of Glass with the first book in the #1 bestselling series by Sarah J. Maas.

In a land without magic, an assassin is summoned to the castle. She has no love for the vicious king who rules from his throne of glass, but she has not come to kill him. She has come to win her freedom. If she defeats twenty-three murderers, thieves, and warriors in a competition, she will be released from prison to serve as the King's Champion.

Her name is Celaena Sardothien.

The Crown Prince will provoke her. The Captain of the Guard will protect her. And a princess from a faraway country will befriend her. But something rotten dwells in the castle, and it's there to kill. When her competitors start dying mysteriously, one by one, Celaena's fight for freedom becomes a fight for survival-and a desperate quest to root out the evil before it destroys her world.

Thrilling and fierce, Throne of Glass is the first book in the #1 New York Times bestselling series that has captivated readers worldwide.

“Action-packed . . . What a ride!” —Booklist on The Assassin's Blade

“An epic fantasy readers will immerse themselves in and never want to leave.” —Kirkus Reviews, starred review, on Crown of Midnight

“Celaena is as much an epic hero as Frodo or Jon Snow!” —New York Times bestselling author Tamora Pierce on Heir of Fire

“Turns a corner from sprawling epic to thrilling psychological fantasy.” —HuffPost on Tower of Dawn

“A worthy finale to one of the best fantasy book series of the past decade.” —Time on Kingdom of Ash