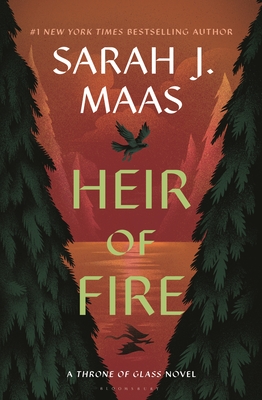 This is book number 3 in the Throne of Glass series.

The heir of ash and fire bows to no one.

A new threat rises in the third book in the #1 bestselling Throne of Glass series by Sarah J. Maas.

Celaena Sardothien has survived deadly contests and shattering heartbreak, but now she must travel to a new land to confront her darkest truth. That truth could change her life-and her future-forever.

Meanwhile, monstrous forces are gathering on the horizon, intent on enslaving her world. To defeat them, Celaena will need the strength not only to fight the evil that is about to be unleashed but also to harness her inner demons. If she is to win this battle, she must find the courage to face her destiny-and burn brighter than ever before.

“An epic fantasy readers will immerse themselves in and never want to leave.” - Kirkus Reviews, starred review, on Crown of Midnight

“Celaena is as much an epic hero as Frodo or Jon Snow!” - New York Times bestselling author Tamora Pierce on Heir of Fire

“Turns a corner from sprawling epic to thrilling psychological fantasy.” - HuffPost on Tower of Dawn

“A worthy finale to one of the best fantasy book series of the past decade.” - Time on Kingdom of Ash