The Night Lake: A Young Priest Maps the Topography of Grief (Paperback) 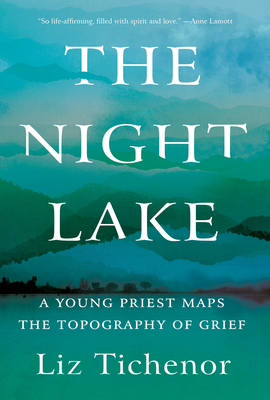 Called "such a sad, tough story, but finally so life-affirming, filled with spirit and love" by Anne Lamott, this is a raw and intensely affecting memoir by a young priest about loss of a child, its grief and its aftermath, and the hard-won joy that can follow.

Liz Tichenor has taken her newborn son, five weeks old, to the doctor, from a cabin on the shores of Lake Tahoe. She is sent home to her husband and two-year-old daughter with the baby, who is pronounced "fine" by an urgent care physician. Six hours later, the baby dies in their bed. Less than a year and a half before, Tichenor's mother jumped from a building and killed herself after a long struggle with alcoholism. As a very young Episcopal priest, Tichenor has to "preach the Good News," to find faith where there is no hope, but she realizes these terrible parts of her own life will join her in the pulpit.

The Night Lake is the story of finding a way forward through tragedies that seem like they might be beyond surviving and of carving out space for the slow labor of learning to live again, in grief.

Liz Tichenor has put down roots in the Bay Area but is originally from New Hampshire and the Midwest. An Episcopal priest, she serves as rector at the Episcopal Church of the Resurrection, Pleasant Hill, California. Tichenor and her husband, Jesse, are raising two young children and continuing to explore the adventure of living, parenting, and serving in their community.

"The Night Lake is a memoir written as it was lived—in measured, small steps forward . . . A purposeful and artistic offering of what it means to live in the wake of death . . . The generosity of Tichenor’s writing and her faith remind us that her story is our story, too." —Kaethe Schwehn, Christian Century

"The memoir is a courageous and thoughtful companion to all those who have suffered a traumatic loss. Her telling exposes both the deep sadness and trauma of deep loss but also reveals the overwhelming rage that often is buried and denied under grief. In doing so, she gives those who have suffered a traumatic loss permission to rant and raise their fist to God in both anger as well as hope. —Bonnie McDougall Olson, The Intima

"A book as resolute and grounded in the truth of experience as The Night Lake will endure as a beacon for anguish . . . In refusing to be placated or comforted by strained banalities, Liz Tichenor is reaching for a deeper mode of existence and co-existence in which the possibility of real compassion is opened by such brave and unguarded storytelling." — Vanessa Able, The Dewdrop

"This debut memoir from an Episcopal priest offers a surprising take on grief, faith and loss . . . The Night Lake is an excellent example of making something beautiful out of unimaginable pain." —Bookpage

"Heart-wrenching yet gorgeous . . . Tichenor’s honest and plush writing lets readers sink into her settings and emotions, whether in grief, hope, or wonder. Perfect for fans of Anne Lamott and any reader interested in the intersection of grief and faith." ––Kathy Sexton, Booklist (starred review)

"Tichenor's courageous memoir is an exquisitely crafted, painfully beautiful chronicle of loss . . . Navigating as a bereft wife and mother, a pastor, a friend and a daughter orphaned because of her mother's helplessness, Tichenor discovers that pain, joy and sadness can prove enlightening, buoying her with hope and eloquent moments of grace. A devastatingly beautiful memoir by a young mother and newly ordained Episcopal priest who is forced to reconcile the loss of her newborn son." —Kathleen Gerard, Shelf Awareness

"Written with extraordinary insight and grace, The Night Lake is a stunning and powerful reminder that tragedy can't be overcome by avoidance; that surrendering to heartache loosens its grip; that true acceptance abides even the deepest pain." --Margaret Wilkerson Sexton, author of The Revisioners

"When Tichenor suffers two tragic and primary losses in her late twenties, she collapses into grief, even as her calling as an Episcopal priest presses her to support others in theirs. With grace, humility, and even humor, she grounds the unfathomable in rituals ornate and ordinary. The result is a raw meditation on fear and courage, loss and love." -- Cynthia Li, MD, author of Brave New Medicine

"From an unspeakable loss, Liz Tichenor speaks. With a courage both heartrending and fierce, she traces a terrain of aching grace. The Night Lake is an astonishingly generous gift." —Jan Richardson, author of Sparrow: A Book of Life and Death and Life

"The Night Lake author Liz Tichenor uses spare, honest, muscular prose to tell a rending story of loss . . . In the face of planetary and individual death and grief, I learn again from The Night Lake that there are companions for us in this world, and that the worl3d is suffused with overflowing love. Run––for she is a runner––with Tichenor––through the story of loss and love that is The Night Lake––it is a story for our time, for all of us."--Marc Andrus, Episcopal Bishop of the Diocese of California