This Is Really War: The Incredible True Story of a Navy Nurse POW in the Occupied Philippines (Hardcover) 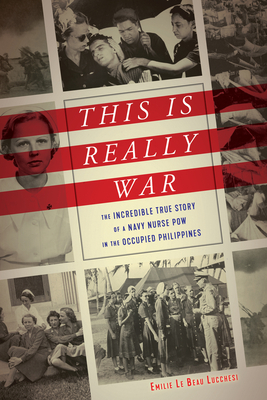 In January 1940, navy nurse Dorothy Still eagerly anticipated her new assignment at a military hospital in the Philippines. Her first year abroad was an adventure. She dated sailors and attended dances. But as 1941 progressed, signs of imminent war grew more urgent. Military wives and children were shipped home to the States, and the sailors increased their daily drills. Days after Pearl Harbor was attacked, the Japanese military assaulted the Philippines.
When Manila fell to Japan in early January 1942, Dorothy was held captive in a hospital and then transferred to a civilian prison camp.  Under the direction of Chief Nurse Laura Cobb, Dorothy and ten other navy nurses maintained rank and reported each day to a makeshift hospital. Cramped conditions, disease, and poor nutrition meant the navy nurses and their army counterparts were overwhelmed caring for the camp.
In May 1943, a civilian physician asked Cobb if the navy nurses would consider transferring to a new prison camp in the countryside. The twelve nurses feared the unknown, but they could not deny they were needed. On the morning of their departure, inmates used the public address system to play the navy fight song, "Anchors Aweigh." The nurses were overwhelmed by the response. They had indeed been the anchors of the camp, who kept ill inmates form drifting.
In the new prison camp, the "twelve anchors" turned a stripped infirmary into a functioning hospital. Despite their own ailments, they provided nonstop care for starving, diseased, and abused inmates. Over the years, their friendships deepened, and several of the women, including Dorothy, even found love.
This Is Really War is an inspiring story about a young nurse who fought for life during a dark time.

Emilie Le Beau Lucchesi is the author of Ugly Prey and has contributed to the the country's largest newspapers, including the New York Times, Chicago Tribune, and Los Angeles Times, as well as Discover magazine and TheAtlantic.com. She holds a PhD from the University of Illinois at Chicago and teaches communication and media courses.

“This Is Really War tells the mostly unknown story of the US Navy nurses captured by the Japanese in the Philippines in World War II. The reader will learn how these nurses, who considered themselves average women, rose to the challenge and survived a prison experience that many, many others did not. A thoroughly researched, fascinating book.” —Elizabeth Norman, author of We Band of Angels: The Untold Story of the American Women Trapped on Bataan and Women at War: The Story of Fifty Military Nurses Who Served in Vietnam

“With her vivid style coupled with immaculate research, Emilie Le Beau Lucchesi tells an incredible true story that reads like great fiction. This Is Really War is an unflinching portrait of women surviving the unthinkable. This is history both epic and personal, recounted by a gifted writer.” —Arnie Bernstein, author of Swastika Nation: Fritz Kuhn and the Rise and Fall of the German-American Bund

“This Is Really War is a testament to both the horrors of Japanese captivity during the Second World War and the resilience of the American nurses forced to endure it. Emilie Le Beau Lucchesi’s beautifully detailed writing is equal parts captivating and heartbreaking.” —Kathryn J. Atwood, author of Women Heroes of World War II