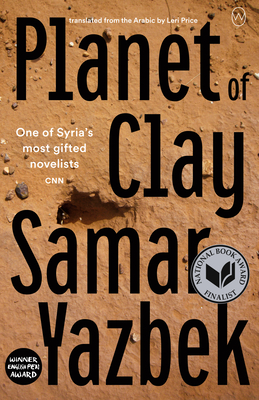 FINALIST FOR THE 2021 NATIONAL BOOK AWARD FOR TRANSLATED LITERATURE

The new novel Planet Of Clay gives a haunting and unflinching look at the horrors of war - the bombing, the starvation, the fear - all seen through the eyes of Rima, a young girl with a vibrant imagination.--NPR

"Planet of Clay is a devastating novel about human resilience and fragility in a time of war."--Foreword Reviews, starred review

Rima, a young girl from Damascus, longs to walk, to be free to follow the will of her feet, but instead is perpetually constrained. Rima finds refuge in a fantasy world full of colored crayons, secret planets, and The Little Prince, reciting passages of the Qur'an like a mantra as everything and everyone around her is blown to bits. Since Rima hardly ever speaks, people think she's crazy, but she is no fool--the madness is in the battered city around her. One day while taking a bus through Damascus, a soldier opens fire and her mother is killed. Rima, wounded, is taken to a military hospital before her brother leads her to the besieged area of Ghouta--where, between bombings, she writes her story. In Planet of Clay, Samar Yazbek offers a surreal depiction of the horrors taking place in Syria, in vivid and poetic language and with a sharp eye for detail and beauty.

Samar Yazbek is a Syrian writer, novelist, and journalist. She was born in Jableh in 1970 and studied literature before beginning her career as a journalist and a scriptwriter for Syrian television and film. Her novels include Child of Heaven, Clay, Cinnamon, In Her Mirrors, and Planet of Clay. Her accounts of the Syrian conflict include A Woman in the Crossfire: Diaries of the Syrian Revolution and The Crossing: My Journey to the Shattered Heart of Syria. Yazbek's work has been translated into multiple languages and has been recognized with numerous awards--notably, the French Best Foreign Book Award, the PEN-Oxfam Novib, PEN Tucholsky, and PEN Pinter awards. Leri Price is an award-winning literary translator of contemporary Arabic fiction. Price's translation of Khaled Khalifa's Death Is Hard Work was a finalist for the 2019 National Book Award for Translated Literature (US) and winner of the 2020 Saif Ghobash Banipal Prize for Arabic Literary Translation. Her translation of Khaled Khalifa's No Knives in the Kitchens of This City was shortlisted for the ALTA National Translation Award. Price's other recent translations include Sarab by award-winning writer Raja Alem.