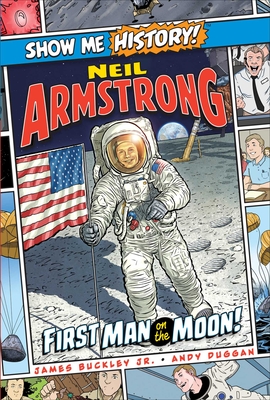 A biography of Neil Armstrong, the first person to set foot on the Moon, in graphic novel format.

Neil Armstrong: First Man on the Moon! is a biography of the astronaut who became the first person to walk on the Moon in 1969. From earning a pilot’s certificate at age 16 to being a test pilot for supersonic jets, Armstrong spent most of the early part of his life perfecting the skills he would need for the historic Moon landing. Calm and collected under pressure, he was an ideal candidate for NASA’s astronaut program, and is remembered for his famous words, spoken after he set foot on the Moon: “That’s one small step for a man, one giant leap for mankind.” Full-color illustrations and historically accurate text make this biography an entertaining, educational, and inspiring read for those who enjoy history and graphic novels.

James Buckley Jr. is a prolific author of nonfiction for young readers, with more than 150 books to his credit (and still typing!). He is the author of more than a dozen titles in The New York Times' best-selling "Who Was...?" biography series, including the Wright Brothers, Milton Hershey, Betsy Ross, Jules Verne, and Blackbeard. Buckley has written more than thirty DK Readers on a wide variety of topics, plus two recent long-form bios of Adolf Hitler and Bonnie and Clyde for Aladdin Books. For Spring 2019, he created the first book in a new series for Aladdin—a bio of astronaut Michael Collins. Buckley is the co-author of Time Inc./Liberty Street's "X-Why-Z" series and wrote and produced the Animal Planet Animal Atlas for Liberty Street. A former editor at Sports Illustrated and the National Football League, he lives in Santa Barbara, California, where he runs a successful book producing company.

Andy Duggan is a comic artist from Chattanooga, Tennessee. Along with work published in Image Comics and Action Lab Entertainment, he’s also been featured in multiple projects with Topps and Upper Deck. His Kickstarter book, Black Fin the Barbarian Shark, was funded and published in 2019. Andy has a longtime girlfriend, Ashley, and together they have two cats, Blair and Pandie.