A Snake Falls to Earth (Hardcover) 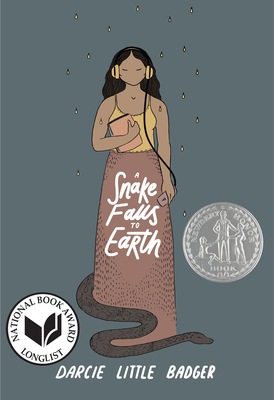 ★ "Fun, imaginative, and deeply immersive, this story will be long in the minds of readers."—Publishers Weekly (starred)

"A highly descriptive story which absorbs the audience into its world, readers will become invested in reading until the very end."—School Library Connection

A Snake Falls to Earth is a breathtaking work of Indigenous futurism. Darcie Little Badger draws on traditional Lipan Apache storytelling structure to weave another unforgettable tale of monsters, magic, and family. It is not to be missed.

Nina is a Lipan girl in our world. She's always felt there was something more out there. She still believes in the old stories.

Oli is a cottonmouth kid, from the land of spirits and monsters. Like all cottonmouths, he's been cast from home. He's found a new one on the banks of the bottomless lake.

Nina and Oli have no idea the other exists. But a catastrophic event on Earth, and a strange sickness that befalls Oli's best friend, will drive their worlds together in ways they haven't been in centuries.

And there are some who will kill to keep them apart.

Darcie Little Badger is a Lipan Apache writer with a PhD in oceanography. Her critically acclaimed debut novel, Elatsoe, was featured in TIME as one of the best 100 fantasy books of all time. Elatsoe also won the Locus award for Best First Novel and is a Nebula, Ignyte, and Lodestar finalist. Her second fantasy novel, A Snake Falls to Earth, received the Newbery Honor, is an LA Times Book Prize Finalist, and is on the National Book Awards longlist. Darcie is married to a veterinarian named Taran.

"“Both authentic and original. Strong, subtle worldbuilding allows readers to immerse themselves in Nina’s near future world of increased climate change and advanced social media technology and in Oli’s magical world of spirits, monsters, and old stories come to life.” —The Hub (a YALSA Blog),

""Though the stakes are high, Little Badger takes time to explore the ways that other species and cultures move through space and time, and what is lost when those ways of seeing disappear. " — Minneapolis Star Tribune,

"“Draws on her scientific training and tribal storytelling to weave a spellbinding tale.” — Texas Monthly,

""Themes of magic, family, asexuality, and traditional storytelling dominate in Lipan Apache author Darcie Little Badger’s delightful and uplifting second YA novel. A Lipan girl named Nina collides with Oli who is from the land of spirits and monsters. But some people will do anything to keep them apart. This is a wholesome, elegantly written read guaranteed to warm your heart!" — Autostraddle,

“If Elatsoe was a ten out of ten, then A Snake Falls to Earth is a solid 11. This book could have been twice as long and I still would have begged for more. Although aimed at a young-adult audience, it has the kind of easy appeal and heartfelt tone that will entice younger kids and older adults as well. Anyone reading or buying YA needs to add this to their shelves immediately.” — Locus

“This is a delightful and imaginative novel with alternating protagonists. One is Nina, a teenager trying to translate a story told by her great-great-grandmother in her native Athabaskan language, Lipan. The other is Oli, a cottonmouth snake with the ability to shapeshift, who is learning to find his way after being pushed from the nest. Climate change features, informed by the author’s geoscience degree and PhD in oceanography. Another theme is linguistic diversity and the crucial role of storytelling in keeping cultures alive. A Snake Falls to Earth is also very much a story of friendship.”—Five Books

"[STAR] “Fun, imaginative, and deeply immersive, this story will be long in the minds of readers.”— Publishers Weekly (starred),

"“A highly descriptive story with open dialogue which absorbs the audience into its world, readers will become invested in reading until the very end."—School Library Connection,

"“Little Badger’s new genre-bending narrative draws on her heritage and the tradition of story-telling that has informed her worldview.”—TIME,

""Her work is magical for all ages."—Den of Geek,

"“Undeniably charming. There is no pretension in the writing, no forced attempts at being on trend, and yet it is completely relevant—whether it is that certain characters are asexual, or use the pronoun they, or the power of the internet, or whether it is the frightening, timely talk of rapid climate change and how it effects more lives than just those of humans, whether it is to remind us that our longevity as humans is intertwined with that of other species, and with that of the earth, or whether it is to remind us of what is most important, the one thing that may save us all—the power of stories, and community.”—Tor.com,