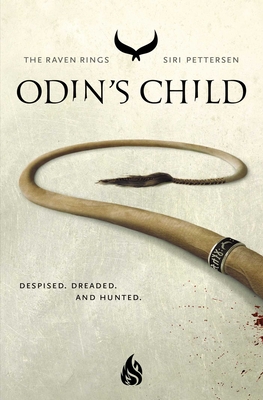 Book One in the Raven Rings trilogy - now in paperback!

An epic fantasy trilogy from Norway about thousand-year-old secrets, forbidden romance, and what happens to those who make a deal with the devil comes at last to the United States

I loved (Odin's Child) deeply from the first to the last word, and was instantly and thoroughly immersed. -- Laini Taylor, bestselling author of Daughter of Smoke and Bone.

...The story examines and upends everything its characters believe in, including their world, their history, their faith, and themselves, while intertwining elements of politics and Norse mythology with a side of forbidden romance. Kirkus Reviews

The intrigue, scope, and depth of His Dark Materials, set in an immersive Nordic world as fierce and unforgettable as its characters.  Rosaria Munda, author Fireborne/Flamefall - Aurelian Cycle

Imagine lacking something that everyone else has. Something that proves you belong to this world. Something so vital, that without it, you are nothing. A plague. A myth. A human.”

Fifteen winters old, Hirka learns that she is an Odin's child – a tailless rot from another world. Despised. Dreaded. And hunted. She no longer knows who she is, and someone wants to kill her to keep it a secret. But there are worse things than humans, and Hirka is not the only creature to have broken through the gates…

Odin’s Child is unique fantasy with Norse roots. An epic clash of xenophobia, blind faith and the right or will to lead.

The first in a trilogy, Odin's Child is a thrilling modern fantasy epic.

Siri Pettersen made her sensational debut in 2013 with the Norwegian publication of Odin's Child, the first book in The Raven Rings trilogy, which has earned numerous awards and nomiations at home and abroad. Siri has a background as a designer and comics createor. Her roots are in Finnsnes and Trondheim, but she now lives in Oslo, where you're likely to find her in a coffee shop. According to fellow writers, her superpower is "mega-motivation"--the ability to inspire other creative souls.

Siân Mackie is a translator of Scandinavian literature into English. They were born in Scotland and have an MA in Scandinavian Studies and an MSc in Literary Translation as a Creative Practice from the Uni­versity of Edinburgh. They have translated a wide range of works, from young adult and children’s literature—including Ingunn Thon’s A Post­card to Ollis, which was nominated for the 2021 Carnegie Medal—to thrillers and nonfiction. They live in Southampton on the south coast of England.

Paul Russell Garrett translates from Norwegian and Danish, with drama holding a particular interest for him. He has translated a dozen plays and has a further ten published translations to his name, including Lars Mytting’s The Sixteen Trees of the Somme, long-listed for the International Dublin Literary Award, and a pair of novels by Christina Hesselholdt, Companions and Vivian. Originally from Vancouver, Paul is based in east London.