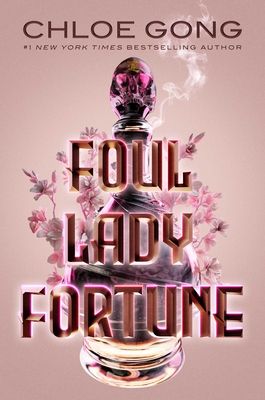 “After reading These Violent Delights, I constantly checked for new writing from Chloe Gong. Foul Lady Fortune did not disappoint, with a new cast of characters (and some familiar faces) to fall in love with, and an entirely new political landscape to immerse in.”
— Ellie Ray, Content Bookstore, Northfield, MN

From the #1 New York Times bestselling author of These Violent Delights and Our Violent Ends comes the first book in a captivating new duology following an ill-matched pair of spies posing as a married couple to investigate a series of brutal murders in 1930s Shanghai.

It’s 1931 in Shanghai, and the stage is set for a new decade of intrigue.

Four years ago, Rosalind Lang was brought back from the brink of death, but the strange experiment that saved her also stopped her from sleeping and aging—and allows her to heal from any wound. In short, Rosalind cannot die. Now, desperate for redemption for her traitorous past, she uses her abilities as an assassin for her country.

But when the Japanese Imperial Army begins its invasion march, Rosalind’s mission pivots. A series of murders is causing unrest in Shanghai, and the Japanese are under suspicion. Rosalind’s new orders are to infiltrate foreign society and identify the culprits behind the terror plot before more of her people are killed.

To reduce suspicion, however, she must pose as the wife of another Nationalist spy, Orion Hong, and though Rosalind finds Orion’s cavalier attitude and playboy demeanor infuriating, she is willing to work with him for the greater good. But Orion has an agenda of his own, and Rosalind has secrets that she wants to keep buried. As they both attempt to unravel the conspiracy, the two spies soon find that there are deeper and more horrifying layers to this mystery than they ever imagined.

Chloe Gong is the #1 New York Times bestselling author of the critically acclaimed Secret Shanghai novels, as well as the Flesh and False Gods trilogy. Her books have been published in over twenty countries and have been featured in The New York Times, People, Forbes, and more. She is a recent graduate of the University of Pennsylvania, where she double-majored in English and international relations. Born in Shanghai and raised in Auckland, New Zealand, Chloe is now located in New York City, pretending to be a real adult.

“Amazing, show-stopping, spectacular. Chloe Gong does it again with her fantastical take on the classic Chinese genre of Minguo-era spy thrillers, where no loyalties are certain and no one can be trusted in the shadowy political battle between the Nationalists, communists, and imperialists. A enthralling mystery that is sure to stun as it unravels."
— Xiran Jay Zhao, #1 New York Times bestselling author of IRON WIDOW

"This book is a dark delight. I found myself transported to a different place and time, which is exactly what I look for in my favorite books. Gong's writing is evocative, and her dialogue crackles. Mesmerizing and mysterious in equal turns, Foul Lady Fortune is a captivating read, and I look forward to the next installment in the series."
— Renée Ahdieh, #1 New York Times bestselling author of The Beautiful Quartet

"Equal parts intoxicating and dazzling, Gong's newest duology is enchanting and unmissable. Each page is a finely honed blade that goes straight to the heart."
— Roshani Chokshi, New York Times bestselling author of THE GILDED WOLVES

"Foul Lady Fortune is a thrilling historical fantasy packed with action, intrigue, and swoon-worthy romance. I will read anything Chloe Gong writes."
— June Hur, bestselling author of THE RED PALACE

"With tense, lush storytelling, a complicated heroine and her swoon worthy foil, Foul Lady Fortune invites you into a dark chapter of twentieth century China where intrigue lies behind every corner. Intoxicating!"
— Stacey Lee, New York Times bestselling author of THE DOWNSTAIRS GIRL

"When I think Republican era spy story, I think thrills, triple agents, and twists. Foul Lady Fortune delivers on all these fronts and more. The chemistry was crackling, the revelations hair-raising, and I was so taken by the world that I did not see the reveals coming, in the best way possible. Chloe Gong has outdone herself, without a doubt."
— Joan He, New York Times bestselling author of THE ONES WE'RE MEANT TO FIND