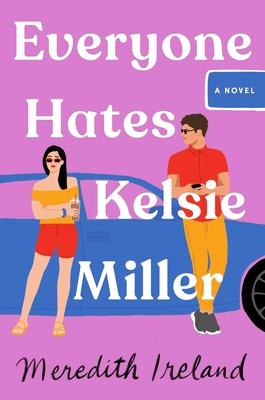 Today Tonight Tomorrow meets A Pho Love Story in this whip-smart young adult novel about a girl who embarks on a “breezy road trip romp” (Publishers Weekly) with her longtime rival to win back her best friend and his girlfriend.

There’s no one Kelsie Miller hates more than Eric Mulvaney Ortiz—the homecoming king, captain of the football team, and academic archrival in her hyper-competitive prep school. But after Kelsie’s best friend, Brianna, moves across the country and stops speaking to her, she’ll do anything, even talk to Eric, to find out why.

After they run into each other—literally—at the last high school party of the summer, Eric admits he’s been ghosted by his girlfriend, Jessica. Kelsie tells him she’s had zero contact from Briana since she left their upstate New York town.

Suddenly, a plan is formed: they’ll go on a road trip to the University of Pennsylvania the following week when both Brianna and Jessica will be on campus. Together, they’ll do whatever it takes to win back their exes.

What could go wrong?

Used to succeeding in everything, Kelsie and Eric assume they’ll naturally figure out the details on the drive down. What they don’t expect is that the person they actually need may be the one sitting next to them.

Meredith Ireland was born in Korea and adopted by a New York librarian. Her love of books started early and although she pursued both pre-med at Rollins College and law at the University of Miami, stories were her fate. She currently resides with her two children, and Bob, a carnival goldfish, who’s likely a person. She writes young adult books, some of which you may like. She is the author of The Jasmine Project and Everyone Hates Kelsie Miller.

Hilarity ensues during their adventure, and the tension between them is palpable. Throughout the story, readers catch glimpses of sexual assault and racial prejudice, along with topics such as children of adoption and surrogate parenting. While none of these themes takes up a particularly large amount of text, Ireland handles them gracefully and with enough intent that they will resonate with teen readers...[a]n excellent addition to any YA collection, especially those seeking love stories with diverse characters.
— School Library Journal

A sweetly satisfying journey through love and the many forms it can take.
— Booklist

A road trip with her rival becomes a journey of self-discovery for Kelsie Miller...[w]ith its focus on personal growth, this is a sweet romance with substance.
— Kirkus Reviews