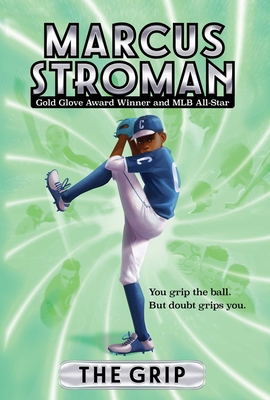 This is book number 1 in the Marcus Stroman series.

In this first book in the semi-autobiographical middle grade series from MLB pitcher Marcus Stroman, a young baseball player learns that perfect games only come with a lot of practice—and some strikeouts.

Young Marcus Stroman is determined to make it to the highest playing level he can, despite every coach telling him he’s not tall enough to become a “real” pitcher. He’ll show them…with some struggling and a whole lot of learning.

It’s easy to forget that for every professional sports player there was a kid just learning that sport, dealing with nerves during try-outs, dropping the ball when all their teammates are counting on them, and learning how to stay friends with someone who doesn’t make the team. These hard lessons are universal whether in the majors or on a school playing field, and so are teamwork, competition, and believing in yourself.

Marcus Stroman was born and raised in Medford, New York, where he attended Patchogue-Medford High School. Drafted by the Washington Nationals in the eighteenth round of the 2009 Major League Baseball draft, Marcus opted to delay the start of his professional career and instead chose to attend Duke University to further his education. Marcus has pitched for the Toronto Blue Jays and the New York Mets and now plays for the Chicago Cubs. Off the field, Marcus is passionate about his work with the community through his charitable foundation HDMH (Height Doesn’t Measure Heart), where he helps kids achieve their own dreams and to instill confidence in themselves. Through his idea of believing in yourself more than believing in what anyone says about you, Marcus strives to be a positive role model both on and off the field. Marcus has always believed in himself and has proven all his critics wrong at every step of his journey. He is known for his determination not only on the field, but in bettering himself off the field and building his confidence in whatever he sets out to do. He hopes to instill that same confidence in kids.