How to Properly Dispose of Planet Earth (Hardcover) 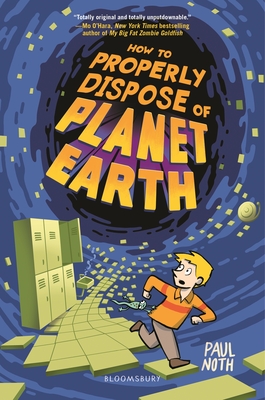 By Paul Noth
Email or call for price
Special Order

Popular New Yorker cartoonist Paul Noth continues his illustrated middle grade series about a boy, his wacky family, and an out-of-this-world adventure in this laugh-out-loud sequel to How to Sell Your Family to the Aliens.

Happy Conklin Jr. is still the only 10-year-old who has to shave three times a day, thanks to being tested on by his inventor father. And it's safe to say Hap is the only 10-year-old who accidentally sold his entire family to aliens. The good news is that Hap managed to save his family--including his tyrannical Grandma--but now the Conklins face a problem that might put the whole world in danger . . .

Hap wants a girl in his sixth-grade science class to be his lab partner but lacks the courage to even talk to her. Through the mysterious powers of Squeep! the lizard, he finds a way to overcome this fear but also, unfortunately, opens a black hole in his middle school that will swallow the solar system unless he's able to stop it. In his race against time to save everything, he's helped by his sister Kayla, greatly hindered by his sister Alice, and uncovers the truth about Grandma's plan to take over the Galaxy.

Paul Noth's cartoons have appeared regularly in The New Yorker since 2004. He has created short animated films for Late Night with Conan O'Brien, and been an animation consultant for Saturday Night Live. He is the author of How to Sell Your Family to the Aliens.

“Shows Noth's mastery of comic timing. . . . All the characters, in combination, make the book worth reading. . . . A story where everyone deserves to be the main character.” —Kirkus Reviews

“Strange and original with just the right amount of juvenile humor, this story features off and endearing characters and a wonderfully weird plot. Hap and his family are a delightful cross between dysfunctional and perfectly loving” —School Library Journal on HOW TO SELL YOUR FAMILY TO THE ALIENS

“Happy's narration is pitch perfect for middle- graders . . . Fans of Allen's Gabby Duran and the Unsittables will find a similar combination of warmth and weirdness here.” —BCCB on HOW TO SELL YOUR FAMILY TO THE ALIENS

“Readers will be likewise amused by the random twists, silly inventions, and frequent spot drawings and sequential panels.” —Booklist on HOW TO SELL YOUR FAMILY TO THE ALIENS

“Engaging, original and laugh-out-loud funny . . . I'm so thrilled for everyone, particularly my 500 children, to experience the imagination and brilliance of this world Paul Noth has created. I just hope that I don't get sold to the Aliens myself . . .” —Jim Gaffigan, comedian and bestselling author of DAD IS FAT and FOOD: A LOVE STORY on HOW TO SELL YOUR FAMILY TO THE ALIENS

“My favorite New Yorker cartoonist just became my favorite middle reader author--and that was after reading only three pages of his hilarious new book!” —Bob Staake on HOW TO SELL YOUR FAMILY TO THE ALIENS